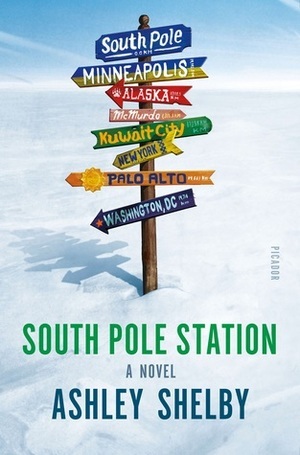 There were many ways to make things disappear at South Pole Station. After all, there were twenty-three different categories of Waste. “Dormitory Biological Waste”—bloody bandages, used tampons, snot-soaked Kleenex—was stored in fifty-five-gallon open-top drums. Galley food waste—like onionskins, uneaten oatmeal, and trimmed fat—was packaged in triwalls lined with three layers of polyethylene gusseted bags. But the category that Pearl found most relevant to her purposes were the Domestic Combustibles, also known as the “Burnables.” This category included paper towels, cigarette butts, food wrappers—cookbooks that had been carefully dismantled, page by page.

Enchanted Broccoli Forest was the first to go.

Still Life with Menu was the second.

Pearl wasn’t sure if Still Life would be missed, but she knew Enchanted Broccoli Forest would. It was a go-to. Vegetarians sometimes requested EBF-specific dishes. But a week had passed, and still Bonnie said nothing about the missing cookbooks. Pearl couldn’t have known that Bonnie would lose the kitchen over the inedible Carrot-Mushroom Loaf from Moosewood Cooks for a Crowd. She only knew Bonnie would lose the kitchen, eventually. It was why Pearl had agreed to take the job in the first place.

No one knew that Pearl had been waiting for a Carrot-Mushroom Loaf moment since she landed at South Pole in late September. She’d been hired as Production Cook, the junior position to Bonnie’s head cook. Pearl had applied for the top position, of course. She hadn’t spent ten miserable years in various eateries and ship’s galleys around the country to become second fiddle in an institutional kitchen. (Nor did she go to Antarctica to become Alice Waters, but you had to pay the bills and government work paid well, especially when room and board was free).

But Bonnie was a Lifer; and after a certain number of years on the ice, Lifers received the privilege of turning jobs down rather than having to re-apply for them. Bonnie would never turn down at job at Pole, and it took only a couple days at Pole for Pearl to understand that Bonnie would not be easily overthrown. She had allies. Those allies were other Lifers, and they’d lost their taste for edible food some years earlier. Calling Bonnie to account for the state of the food at Pole wasn’t going to be an effective strategy. The operation would have to be subtler than that, requiring the actions of a person exhibiting the traits of monomania. Not all of the traits, of course—that kind of psychological profile would be peremptorily red-flagged by the VIDS team. Just a few of them.

“Can you focus obsessively on single thing?” Tucker had asked Pearl back in Denver after the psych exam. “Can you be insane when it comes to this single thing—improving the food—and be rational about everything else?”

“What do my results say?”

“Then you already know the answer.”

To learn more about Ashley Shelby and her book, go here.