Spark and the League of Ursus 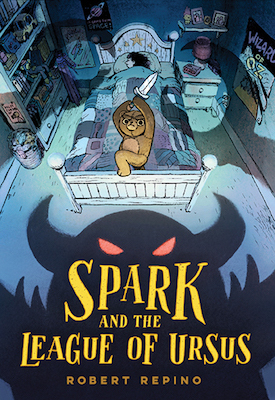 Spark rested her head on Loretta’s chest, with her paw on the girl’s rib cage as it rose and fell with each breath. Loretta’s eyelashes fluttered, tickling Spark’s fuzzy ear. Spark liked it. Teddy bears like her were meant for this. They were meant to stay with their human, their best friend, and watch over them in the darkest hours of the night. Outside, the buzzing streetlamp glowed like a phony sun. The toys on the windowsill cast shadows on the rug. And as the house settled in, as the quietest stretch of the night began, Spark saw the monster for the first time.

It began with a scratching sound, loud enough to make Spark lift her head. In the corner of the room, a blackness spread outward. The hardwood floor and painted walls rippled and sank into darkness. Then the void glowed red like the embers of a fire. The light glinted off Loretta’s movie posters. Flickering shadows extended from the bookshelf and the enormous wooden desk. On top of the shelf, the sock monkey named Zed squatted with his paws over his eyes.

Spark waddled to the edge of the bed, where Loretta’s feet rested under the blanket. She tried to stand tall enough to see into the portal that had formed in the wall. A shape appeared; it was a man’s head, only larger, and with sharp horns curving upward above the brow. Spark crouched behind the foot- board. She could make out the monster’s face now. He had enormous eyes, like an owl. There were two holes above his mouth, as if the nose had been sheared off at the root. A thick chain wrapped around his collar, holding a hideous pendant: it was a human face, with leathery skin stretched tight, the eyes squinched shut. The links of the chain curled under its jaw, which hung open as if letting out an eternal scream.

The monster continued to rise, carrying with him the smell of grease and soot. A chain mail vest covered his torso. A plate of rusted armor, flecked with bits of gold, encased his shoulders, with two sharp points on either side. At his waist, the pale human skin gave way to greenish-black scales.

And then the first claw rose over the edge of the portal, followed by another, then another. Then another. Thin legs, with knobby hinges, like an insect’s. The creature slithered out— half man, half scorpion. Spikes pointed from the armor along his spine. The tail ended in a two-pronged pincer the size of a pair of hedge clippers.

The monster stopped. The scant light reflected in his eyes. When they fixed on Spark’s furry ears poking over the footboard, the monster squinted. There was no point hiding now. With Loretta still fast asleep behind her, Spark stood straight. Maybe this would be enough to scare the monster back into his hole.

The monster leaned forward and bared his glistening teeth. He let out a long hiss. And then, impossibly fast, he climbed the wall. On the way up, one of his claws ripped the corner of a poster for The Wizard of Oz. And before Spark could speak, the monster hung upside down from the ceiling. Somehow, the necklace with the human face remained attached to his chest. His tail reached for the foot of the bed. The pincer snapped shut and then opened again like some meat-eating flower.

Spark trembled. She knew monsters were real. Teddy bears were meant to ward them off. The only problem was that she had never seen one until now.

The monster hissed again, and a blob of spit fell from his teeth onto the floor.

Spark tried to remember the oath: the sacred words, first spoken by the Founders of the League. Every bear needed to recite the oath in a moment like this. Doing so would chase away even the most powerful monster. As she hastily assembled the words in her mind, they grounded her. They felt magical. They had to work.

“I am Spark,” she said. “I am the sworn protector of this house.”

The monster’s tail continued to slither. The pincer scraped along the bed frame.

On the bookshelf, Zed pulled his hands away from his eyes. “We give refuge to the innocent,” Spark said. “We defend the light . . . to the final light . . . in times of darkness. By the power bestowed upon me by the League of Ursus, I command you to be gone!”

She didn’t even know what some of the words meant. “The final light”—what was that supposed to be? But Sir Reginald, the bear who taught her the oath, would have been proud that she got it all out at once. Though he would have nitpicked her mistakes. He would have told her to say it louder next time.

The monster should have run away by now. Instead, he let out a new hiss, higher pitched, which quickly dissolved into hysterical, cackling laughter.

A piercing shout rang out. Spark felt movement behind her. Loretta sat up, screaming. The monster grimaced. Spark covered her ears.

Loretta shot from the bed, whipping the covers so hard that she flung Spark into the air. The teddy bear collided with the desk and fell to the floor. Before Loretta could reach the door, it swung open. Light from the hall poured into the room. In the doorway, Dad stood bleary-eyed and unshaven, wearing a frayed T-shirt and boxer shorts. His face looked so different without his glasses.

Spark turned to where the monster had been. But the creature was gone, the portal sealed.

“No, it was—” Loretta stared at claw mark on the poster, her lip quivering.

“Dad, I swear there was something in here!”

“I know, I know. But it’s gone. And Mom and I are right next door.” His tone suggested that eleven-year-old girls weren’t supposed to have nightmares like this anymore.

“And look,” Dad said, “you left poor Spark on the floor.”

Spark lay still, a clump of brown fur, the way she always did when humans were watching. Loretta scooped her up and took her to the bed. She rolled away from Dad, her arm wrapped around Spark’s neck.

“Are you okay, sweetie?” Dad asked.

She wasn’t fine. Dad waited a moment before closing the door.

Loretta’s heart thumped against Spark. The girl wept silently, stopping only when she gasped for air.

Long after a pool of tears gathered on the pillow, Loretta finally drifted off to sleep. Spark lay in the same position, waiting for the sun to rise, listening for the scratching noise.

Reprinted courtesy of Quirk Books
To learn more about Robert and his book, go here.