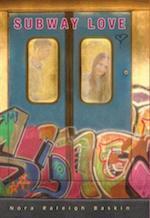 Gotham teacher Nora Raleigh Baskin has just seen the release of her latest YA novel. Subway Love tells the story of two teenagers who fall in love after meeting in a New York City subway station. But this is not your average “boy-meets-girl” love story—while Jonas exists in the present day, Laura lives in 1973.

Take a sample ride through a chapter:

Before you come into this world, while your body is floating safely inside the mother womb waiting to be born, your soul is introduced to its mate, your soul mate. This is your beshert. Before you are born, all knowledge of the universe is yours so that when you met this person on earth, you will be able to recognize them.  However, for most people, the trauma of their birth is so great it causes nearly all that understanding to be forgotten immediately, and babies come into the world knowing nothing, completely helpless and totally dependent. It takes a lifetime to regain all this knowledge and most people never do. However you will, again, cross paths with your soul mate on earth, and, if you are lucky, a tiny glimmer of your memory will be triggered, and you will feel that you’ve known this person your whole life, even though you’ve only just meet. It won’t matter the difference in your ages or where you lived or where you were born. You met your beshert outside of time and space as we understand it. You met your beshert in heaven, and though it is destiny that you meet again on earth, it will be your choice to stay and listen to your heart.

But that is not what he told Laura.

“I’m not sure,” Jonas said. “I think it’s Yiddish actually. It means destined, like fate, you know?”

“So that explains why you disappeared from the subway three weeks ago and now you’re here?”

“I don’t know, but something’s going on.” Jonas said. “I know I’d like to be able to see you again.”

He could see Laura blushing, her face spotted with red at the top of both her cheek bones. He wanted to touch her skin. It looked so soft. He was sure it would be. He wanted to lean in and press his lips against hers.

Jonas reached into his pocket for his cell phone. “That’s weird.” It was on, but the time wasn’t showing up. 00:00.

He had no bars. He never did down in the subway, but it always showed the time.  Laura leaned over.

“Are you serious?” But he knew she was.

Jonas looked up. There were a few people in the car with them at this point, and the next stop was Laura’s, assuming she wanted to get to her father’s. There was an African-American woman in a long furry sweater and lots of blue eye shadow. There were two kind of nerdy-looking white men in stupid-looking suits and ties, nothing unusual there. And an old woman sat at the other end of the car, sleeping. Again, nothing unusual except that maybe no one else was looking at their cell phone, or Blackberry, or iPod. No one had earplugs or headphones on. Nothing unusual because everything about this was amazing.

She jumped up. “Listen, I’m sorry. But this time I really have to go. I can’t get in trouble again.”

The train was slowing and jerked to a fast stop. The doors slid open and just before she bolted out, she bent down close to Jonas’s face.

“I don’t know what’s going on either, but if you want, I think you can find me here.”

She opened her mouth slightly; she leaned toward him; she pressed her lips to his.  He hardly had time to return her kiss.

Reprinted with permission from Candlewick Press.

Learn more about Nora Raleigh Baskin and her book here.