Sunday’s On the Phone to Monday 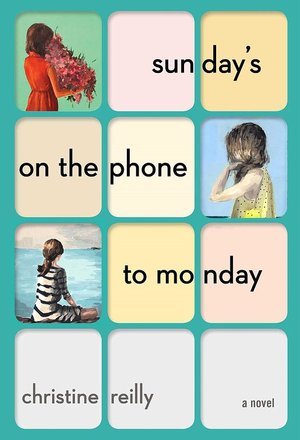 Mathilde's father, James Spicer, had been the last person she’d known to use a shoehorn and a handkerchief, archaic tools gone the way of arrowheads and telegrams. He’d been an art dealer. Mathilde’s father, who’d been polite when sober, was square-headed with big and fat feet. Who’d worn a camel-colored coat and hat, which he’d always tip in elevators. Mathilde’s father, who’d smelled like ash, smoked pastrami, and melancholy.

They had a routine. Every work evening she’d hear the door unfasten in their apartment. She’d yell, Daddy’s coming home! He’d say, hello Boots, because of how he’d claim she was only as tall as the tops of his boots. Her mother, Judy Spicer, would hover in the next room like a minor character in a play.

Boots, he’d say, what was the very best part of your day? He’d pull her onto his lap. He’d squeeze between the backs of her shoulders—the place where wings would have sprouted, if humans grew wings.

Mathilde would say, this minute. She loved him as fiercely as a daughter could love her father, even one who was acquainted with his flaws—such as the nights he came home knee-deep in his scotch, burping, and slurrily calling her Roots instead of Boots.

Daddy’s coming home!, and he’d open the door, and he’d come home. If she were lucky, he’d be sober. She wasn’t always lucky. Regardless, it was good to have a father in the house.

When Mathilde’s father suffered a Heart attack on the 2 train coming home from work, she’d been in the middle of a rehearsal. Mathilde was sixteen, and her father had been forty-four. She was Liesl in the Lycee Francais de New York High School’s production of The Sound of Music. She was lucky because Jack Jetter was cast as Rolf. Rolf and Liesl were in love.

Mathilde had always fancied Jack, who was a grade older, but truly fell in an incurable love at their high school homecoming dance. This was four months before. The song playing in the background had been the Supremes. “Baby Love.” Jack had pressed his cheek against hers, a head and a mouth taller. When the song was over, he kissed her forehead, sputtered a raspberry on her left ear. You’re going to make some man very lucky someday. I’m already jealous.

Someday a man would love her. Mathilde couldn’t imagine making anybody lucky, let alone a man. - Maybe he loves me, - she fooled herself. - Except why can’t he be that man? -

The next morning, Mathilde heard the same song on the radio, her favorite golden oldies station, counting the times Diana Ross sang baby. There were twelve different baby’s Diana crooned after the other, twelve baby's clunking like pennies, waiting to be wishes at the bottom of a fountain. Baby baby baby, Mathilde shimmied, at home with the silvery superfluousness of her own voice. Twelve was the magic number. If Jack’s picture appeared in the yearbook twelve times, it meant he loved her. If she saw him twelve times that week in the hallway, it meant he loved her. But twelve was an unkind number, spare and rationed. In order to get to twelve, you had to go one and two and so on, and before you knew it, you lost it to thirteen.
--

Reprinted by permission of the Simon and Schuster.

To learn more about Christine and her book, go here.