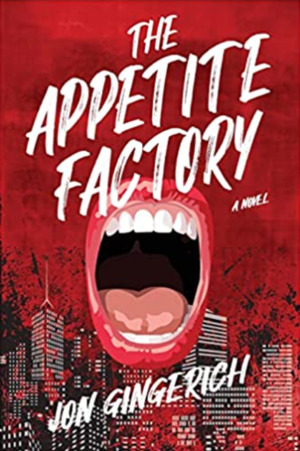 An excerpt from the end of Chapter 1 of Jon Gingerich’s novel The Appetite Factory:

The team left and Leonard closed the door. He found a can of air freshener and hosed down the chairs, retrieved a handheld vacuum from his closet and voided the area of its human crumbs, discarded hairs and castaway threads and dermal detritus, before returning to his desk. Tobacco sunlight slanted through the window as he made a half attempt to organize piles of paperwork, brochures modeling condominiums he’d been researching for his mother. Then he reached into his pocket and removed the bottle of soap he’d lifted from the hotel that morning. He thumbed open the cap, held its plastic nipple under his nose and drew in a warm profile. Citrus notes, bridle leather, the first breath of spring.

Sometimes he imagined what he’d say if they found out, if he was ever called to explain. The first taste made his tongue curl and resulted in a gag, because even after years of experience he couldn’t help it; no one could. As he continued draining the syrup into his mouth, bitter proofs began to rile his senses, tasked his palate with sour plastics, distant flavors of dried apricot and aged wood. By the second taste he was used to it, and then a strange and evocative warmth arrived, as though someone had told him a secret. He tilted his head back and drank the entire bottle this way, and there was an exhilarating rush, a roaring in his ears as he was plunged under impossible waves, drunk and helpless but safe somehow, cradled in great arms at a time before he’d been apprised of the world’s disappointments. He gagged again and grasped for water, which he threw down before surrendering in a grind of coughing and keening, as a single iridescent bubble that had traveled up from his gullet emerged at the gate of his mouth and popped on his bottom lip.

Reprinted with permission from Keylight Books. You can learn more about Jon and his writing here.