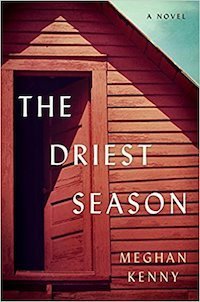 IN THAT DRIEST SEASON, Cielle’s father hanged himself in the barn. A rope tied to a beam above stacked bales of hay, a wheelbarrow, rusted cans. Cielle found him. Home from summer school in the middle of July, and her legs couldn’t move beneath her. She looked and didn’t look. Her father hung still, bloated and blue. She thought of chickens, pigs, and hides of cows tied up and heavy-looking on ropes and hooks at the butcher’s.

Cielle wasn’t a child, nearly sixteen. She walked closer and touched his boot. Jesus. Sweet Jesus. She knelt before her father and thought for a moment he could fall. Light came in from rafter windows and cut long square shadows on wood plank walls. Then light shifted to dark from what she knew to be passing clouds. The barn was cool and damp. Sharp pebbles dug at her knees. She didn’t look at his face again, or his hands, or all that was him outside of his clothing. Because it wasn’t him right there, but something else, someone unrecognizable, and a memory she didn’t want. Why had she gone into the barn? She never went in first thing after school. But that day she did and she couldn’t remember the reason.

Their farm wasn’t large, but it paid. It was a living. Wheat, corn, hay, oats, alfalfa, tobacco, chickens, pigs, and dairy cows. Their house was two hundred feet from the barn. Where was her mother? Helen, her sister, had gone to the lake. Cielle stood and touched his boot again. It floated above her shoulder.

She kept her eyes down and went to the house. The dirt road was dry and soft like flour. The red pickup truck was parked in front, and fresh garden radishes sat in a strainer in the kitchen sink. A pitcher of iced tea sat on the Formica table. She called for her mother, but there was no answer. She went out back into the garden, but no one was there. A breeze came through and rustled leaves. Cielle stood a moment at the door, expecting the world to stand still with her, but it didn’t. Clouds like stretched gauze moved quickly above, the tire swing in the oak tree shifted, and its chains creaked.

She walked to the front yard. No one. But on the floor of the front porch, in neat order, was her father’s wallet, his hat, a picture of her mother, of Helen, of herself, and of a young boy. On top of each photo was a heart-shaped stone. Stones they’d collected together at the lake. Their heart stones. Their hearts. She assumed the boy to be her father as a child, during a happier time. A time he wished he could go back to, before migraines. There was her family—lined up, paper on wood. The edges of the photos fluttered in the breeze.

To learn more about Meghan and her book, go here.