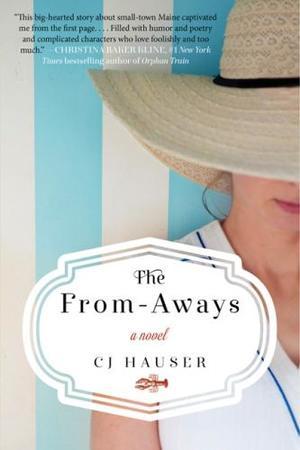 Gotham teacher C.J. Hauser just saw the release of her novel The From-Aways. It’s about two young women who have settled in a small fishing village in Maine. Leah, a New York City reporter, has come to be with a man. Quinn has come in search of an estranged father. Neither of them fits in as well as they had hoped. From there, all kinds of intriguing things ensue.

Here’s a glimpse of the opening, where we meet Leah:

I have two lobsters in my bathtub and I’m not sure I can kill them.

I’m sitting on the rim of the tub. It has curled, brass feet. Everything seems alive and haunted in this house, that’s my first problem.

My second problem is that I pet the lobsters. I roll up a white-buttoned sleeve and run my pinched fingers along the length of Lobster No. One’s antennae. It feels sensitive and unbreakable like coiled wire. Lobster No. One knocks his crusher claw against my hand, but there’s a thick, pink rubber band binding it up, so I’m in no real danger.  I stroke Lobster No. Two’s antennae as well, so they’re even.

Henry says one lobster boil won’t make Maine my home, but he is wrong.

Both lobsters have dark spotted backs that remind me of Dalmatian puppies. I really should not be thinking of them as puppies.

I get a six-pack from the fridge. This is my plan: I will get blind drunk and then I will kill these lobsters. I tie my hair up in a dark knob. I pour salt in the water. I use the faucet to pry the cap off my bottle. Beer geysers up and fizz plops in the water like sea foam. Henry says his mother, June, gave her lobsters beer before cooking them. She also bathed them in seawater so they’d have one last taste of home. I ask the lobsters, “Do you feel at home?”

Of course not. Some bearded yahoo caught them in a pot. Their home is long gone. As is mine, but no one snatched me up. Instead, I snatched Henry. I married him and begged for us to move to his hometown: Menamon, Maine. I broke the lease on my apartment. Quit my job at The New York Gazette. Donated the tangle of wires and smart phones and life-simplifying devices from my purse, because I wouldn’t need them once I left New York.

People use those in Maine, you know. Henry said. We’re not going back in time. Just north.

So now I will find a way to do this, because love is boiling the lobsters your freckle-backed husband doesn’t believe will grow you instant roots. My parents raised me an only child in a nineteenth floor penthouse. No one grows roots nineteen stories deep. This is my chance for roots.

I swing my legs over the side of the tub and stare at my underwater feet. My toes are painted the color the lobsters will be once I boil them. Lobster No. One and Lobster No. Two conference at the other end of the tub. I turn over my beer bottle so it glugs empty into the tub. I open another one for me.

We take turns, the lobsters and I, finishing the six pack. I had imagined tonight so clearly. The boiled red beasts on blue plates. The melted butter in its crock. The wine bottle sweating. The sound of waves through the screen door and of Henry, laughing. A warm breeze wending through the house. I have been imagining this dinner for months. Ever since I started thinking about Maine.

The lobsters jostle around my feet. I look at the empty six-pack and know I won’t be able to kill them.


Reprinted by permission of William Morrow.

To learn more about C.J. and her book, click here.