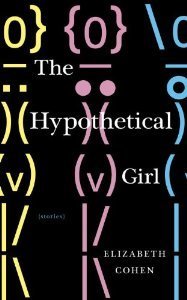 Gotham teacher Elizabeth Cohen recently saw the release of her short story collection The Hypothetical Girl. The stories each explore the curious merging of mating and technology. An aspiring actress meets an Icelandic Yak farmer on a matchmaking site. A deer and a polar bear flirt via Skype. That kind of thing. Oprah.com picked it as a book of the week and said, "Clearly, this book is about the state of modern romance, but it's also about our timeless fascination with identity—a weighty subject that Cohen handles with intelligence and a dash of much-needed whimsical comedy."

Here is the opening of the title story:

For some time now Emily has been vanishing. It began with her edges. The outside ones; arms, legs, back, and so forth. They began to go all soft focus, as seen through unadjusted binoculars. Next to go were her feet. She would look down and half the time they were hardly there. Ghost feet. Then it was her eyes. They looked like sketches of eyes. Oh dear, she thought. And they were such nice eyes. Everyone had said so. She was like those islands in the South Pacific that are covered entirely by the ocean at high tide. Or those stars that are sucked up on certain nights by shreds of cloud. Here and then gone. It was troubling to see whole pieces of herself blur.

“I guess some people die and some people just disappear,” she said to her therapist, June. She was seeing her twice a week now. “There is really not much you can do about it.”

Some days she felt just like her old self. Very there. But other days she was not much there at all. She could walk through a mall or crowded street and nobody so much as looked at her. She could say hello or nod to people and they didn’t even glance in her direction. I am almost gone now, she thought.

Naturally, you want to know how such a thing happens to someone. You are concerned that this could be something that could happen to you, and you would like to avoid such a fate. Was it something she ate? Drank? A peculiar bout of influenza or something contracted abroad, perhaps, when she went on that little tour of Micronesia with her friend Allison? Could it have been the entire case of chicken-flavor ramen noodle soup she consumed last winter, after she broke up with Dane? God knows what they put in that stuff. She hadn’t left her apartment for weeks, subsisting on ramen noodle soup and nothing else. She did not answer her phone or e-mails or check her Facebook page. She just lay in bed, feeling her limbs sink down into the blankets like quicksand, and read the entire oeuvre of Henry James. Then she read most of Flaubert and a good deal too much Maupassant. She read in the dark, by the light of a small flashlight. Reading and sinking. Sinking and reading. She gobbled books like someone eating chocolate. Guiltily, naughtily. To the exclusion of all else.

Philosophical query: If a girl reads in a forest and nobody is there, is she really reading? Is she really there? Is there any point to such a girl?

“Mom?” she shouted, into her mother’s answering machine. “It’s me, Emily.”

No answer, despite the shouting.


She was trying to make a date to ask if she could store some things in her mother’s attic, as a precaution, in case she vanished entirely. But how can you make a date if you can’t even get someone on the phone? You can’t. To be invisible is a special status, and not an altogether bad one, she decided.

Reprinted by permission of Other Press

To learn more about Elizabeth and her book, visit: thehypotheticalgirl.com