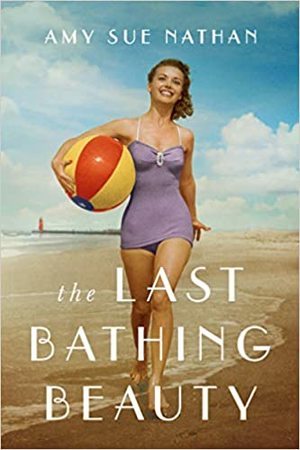 Any other bride might have gazed into the mirror, stepped away, and then glanced back over her shoulder for another peek. Not Betty. She hadn’t looked at herself once today, and in fact she’d avoided her reflection all week. She knew the person looking back from the mirror would not be her. Betty Claire Stern no longer existed. She wanted to say she died, but Betty was mindful of her reputation for melodrama.

Perched gingerly on the window seat with a layer of crinoline crunching beneath her thighs, Betty studied her bedroom. Pink and floral, it had been perfect for growing up, playing with her friends, and for private times. Her slice of North Beach and Lake Michigan was also perfect. She turned, glanced out the window to the West, and sighed.

As of tomorrow, Lake Michigan would be to the East, and her bedroom—one she had never seen, but that likely wouldn’t be pink posies—also wouldn’t boast a view of anything besides a patch of grass or a front stoop. Betty was moving from Michigan to Illinois, from South Haven on the lake to Skokie in the suburbs.

It wasn’t really that far. Just a few hours’ drive.

Would she have a car?

Betty lifted the curl cluster at the nape of her neck with one hand and fanned herself with the other. She inhaled through her nose, puckered her lips, and exhaled so hard it sounded more like the wind than the sigh she’d intended. Perspiration gathered on her brow. If she blotted or wiped, the pancake makeup would lift, so she leaned toward the sill and a light breeze brushed over her face, refreshing her as it dried the dampness. The air chilled Betty’s skin, giving her a cold forehead to go along with her cold feet.

Pre-wedding jitters, that’s all it was. According to Ladies Home Journalthat was normal. And hadn’t Betty longed for normalcy?

Nerves were not the same as doubt.

Someone strolled at the lake’s edge; his shirt hung loose over his shorts; his arms swung wide. Betty’s heart pattered for a hopeful second, and then regained its steady beat. There would be no unexpected visitor today. No impromptu drive, hike, or ice cream cone. The day had been perfectly planned from her dress to the guests, flowers, and food. She needed to stop daydreaming what ifs. The fellow on the beach seemed a capricious boy without a care, a schedule, or a mandate. He was likely looking for dropped coins. No, he was probably collecting bits of beach glass for his sweetheart, the way visitors had all summer.

Her whole life there had been treasures for the taking right outside her door. Sometimes she’d grabbed them. Sometimes she’d overlooked them. But they’d been within reach. Betty flinched, about to abandon her room in search of riches, forgetting, for one sliver of a moment, that she was getting married today.

That beach glass might as well have been on the moon.

Reprinted courtesy of Lake Union Publishing
To learn more about Amy and her book, go here.