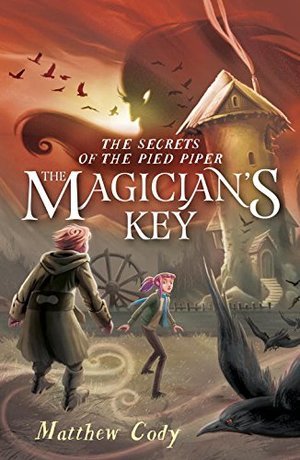 The crow paced back and forth across Vodnik’s desk, using stacks of paper as stepping-stones. Vodnik watched as it stumbled over a stapler, sending pens rolling off the edge. Yet the filthy bird strutted around like a little monarch, careless of the mess it was creating.

“Did you know,” asked Vodnik, “that back in my day the peasants didn’t stuff scarecrows with straw? Oh no, they stuffed them with dead crows. Stitched them all together and hung them in the field as a warning. Can you imagine?”

The crow cawed at him, flapping its wings in agitation. Perhaps Vodnik shouldn’t have goaded the creature so. Crows loved to gossip, and one could learn much if one knew how to listen. The crows had been talkative lately, and the talk was all about magic. Magic this world hadn’t seen in centuries . . .

The crow grew quiet as something caught the bird’s attention—a cockroach scuttling across the office floor.

Vodnik leaned back in his chair and stroked his long beard, fingers absently working at the tangles. Magic had all but died out, many centuries ago, when mankind stopped fearing the dark. A great exodus followed and most of the magical creatures, or the Folk, as some called them, fled this world. There were pockets still here and there. Hints of the old powers lingered in certain bloodlines, but most of those lived in the shadows—descendants of beings too stubborn or too stupid to have made the journey to the last sanctuary of magic, the Summer Isle, back when the way was still open. Now the door was shut, and if you asked anyone, they would tell you—Vodnik had the only key.

But the crows were talking.

Poor wretched Vodnik. Once just a farmers’ fable, a miserable hedge magician haunting mills and riverbeds, waiting for sailors to drown on the treacherous waterways so that he might jar their souls to fuel his petty magic. But that was long, long ago. Before Vodnik had discovered the key to real power, the Key of Everything.

His desktop exploded a shower of papers as the crow suddenly launched itself after the unfortunate cockroach. Vodnik hurled a paperweight—a dead scorpion encased in cheap plastic—at the horrible bird, but he was a terrible aim. The crow dodged it easily, and flew out the open window, its meal clasped firmly in its beak.

Vodnik looked down at the mess the crow had left behind. Magic was scarce in the modern world and it had to be rationed. Those who dreamed of the Summer Isle, the desperate and afraid, those people had to come to Vodnik. He was their only option.

But now the crows were talking about strange new developments. They told Vodnik of two children who had left this world for the Summer Isle. They’d left the village of Hamelin and crossed over to the land of magic.

To learn more about Matthew and his book, go here.