The Mermaid of Brooklyn 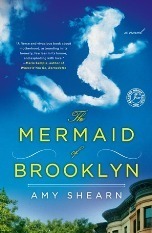 Gotham teacher Amy Shearn recently saw the release of her novel The Mermaid of Brooklyn. It tells the story Jenny Lipkin, a Brooklynite magazine editor/writer and mother of two small children, who is pushed to the end of her rope by all the demands in her life…until she forms a mysterious connection with a mermaid from the East River.  It’s funny and touching and O (Oprah’s magazine) likes it, saying, “Shearn captures both the beauty and the banality of parenthood.”

Before I died the first time, my husband left me broke and alone with our two tiny children and it made me feel very depressed, etc. It’s the same old story: He went to buy cigarettes and never came home. Really. Wouldn’t you think you’d want to pack a bag or two, leave a forwarding address? Couldn’t he have at least taken the dog? These were the things I wondered in the beginning. Not: was he having an affair, or: was he mixed up in something nefarious, but: I can’t believe he wouldn’t bring his datebook, his favorite loafers; I can’t believe he didn’t change the lightbulb in the hallway before deserting us. He knew I couldn’t reach that lightbulb. The whole thing was unlike him. Then again, I was the one who died, which was unlike me, too.

I would be lying if I said his leaving wasn’t a tiny bit of a relief, at least at first. My initial thought—due mostly to sleep deprivation, the effects of which, as any mother or political prisoner knows, never entirely fade—was that once the girls were in bed, I could ignore the dishes to be done and laundry (still in a compact three-day-old brick from the Laundromat drop-off service) to be put away; I could take a bath and then sleep (until Rose’s next feeding) in a big empty bed with pillows mounded up on either side. I wouldn’t need to make a grown-up meal for Harry, who annoyingly preferred dishes seasoned with things other than butter, and who inconveniently favored dinner conversation consisting of topics other than whether or not mermaids existed and, if so, whether or not their mommies made them take baths. I would not need to stifle the yawns that he mistook for boredom as he dramatically recounted the undramatic details of his day. I would not need to come up with a compelling excuse to avoid sex and then feel guilt both at the refusal and at the unoriginality of the desire, the undesire.

I know this doesn’t make me sound like the nicest wife. But back then I only thought he was late coming home from work. I didn’t know he would be gone so very long, that it would take him months and months to battle his way home, as if he were returning from the Crusades and not the Ever So Fresh Candy Company headquarters in Bay Ridge, Brooklyn. It didn’t occur to me that nothing would ever be the same.

I forgot and didn’t remember for some time that I actually had spoken to him on the evening in question. My days had a habit of bleeding together, and it was often difficult for me to pinpoint whether we had indeed talked a few hours earlier or whether I was remembering the day before. But no, I think it was that night, that fateful night, when, believe it or not, it was raining ominously, a storm of Great Plains–style velocity, unleashed by restless nymphs polluting the city’s clouds, must have been, because there was such vindictiveness in the thunder rattling the kitchen window and spooking the imminently spookable baby so that she was wailing into my collarbone as I called Harry’s phone, wanting to know if (oh God, so typical) he could pick up some milk, a request that was met with irritation—he didn’t see why I couldn’t take care of these things without involving him. Betty sat on her booster seat, swinging her legs with a buoyancy that belied her scowl. I looked over just in time to see her open her mouth and hatch a mound of chewed grilled cheese onto the table.

Reprinted by permission of Touchstone
To learn more about Amy and her books: amyshearnwrites.com