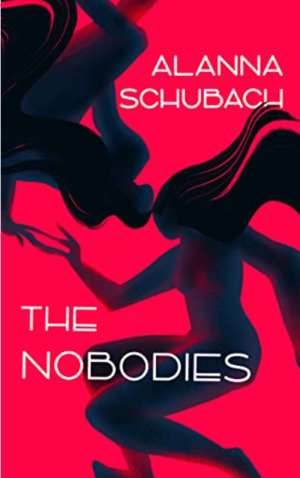 Jess reentered her life without ceremony. She just walked up the street while Nina was taking out the trash. It was 10:00 a.m. and she came from the east, her features shadowed, but there was no question it was her. Nina recognized the walk: a trace of masculinity in the set of her shoulders, arms slicing wide arcs through the air. Nina had never quite been able to imitate it.

As Jess drew nearer she came into focus. Her hair was longer than Nina had seen it before, and darker. Her eyebrows were plucked thin enough to be more like suggestions. She was still small, but dense, a collapsed star. The world slid toward her.

Nina’s first instinct was to run. She was undefended—she needed time to prepare. But where was there to go? Jess was almost upon her. Nina was painfully conscious that she had just touched the befouled lid of the trash can, that she was wearing the T-shirt she’d slept in, which had green lettering that read you wouldn’t like me when I’m hungry. She wiped her hands on the back of her jeans, as though she could wipe away their trembling.

Then Jess was there. Her lips stretched wide, seemed to flick on a light behind her eyes. “You look the same,” she said. Nina took a step away from the garbage and Jess drew her into a hug. She hoped Jess couldn’t feel the thrum of her heart as their bodies touched. There was the familiar smell of shampoo and something new, chemical, like turpentine.

They parted. Jess took in the shirt. “I was worried,” she said, “that I wouldn’t recognize you.”

Nina unstuck her tongue from the roof of her mouth. “You look amazing,” she said, which sent Jess’s eyes mercifully away, down toward her feet. “What—I mean—” What are you doing here? was too cold. “What brings you here?” she said, and wished immediately she could shove the strange phrase back down her throat.

Jess laughed. “I missed you,” she said. Her voice was richer somehow, thickened by the five years since Nina had last heard it.

Nina swallowed the urge to ask if this meant all was forgotten, made right. She had believed what she needed, what she deserved, was an apology, a reckoning. For everyone who claimed to care for her to feel, saturated in every cell, her devastation. But Jess’s three words, like a charm, dissolved the desire completely.

You should see my place, Jess told her, as Nina apologized for the apartment. It was a duplex, with none of the glamour the word suggested. Nina’s room on the basement level was raided by mice; the freezer overfilled with frost they had to hack away at each month. The living room, all but crammed by the couch, faced the busy East Village street, and sometimes at night people would stop and peer in. Nina guided Jess around the tiny space, murmuring; Eleanor was still asleep, her door closed.

“Show me your room,” Jess said.

The single bed with its unwashed comforter flush against the wall, the dull blue carpeting, the slice of sidewalk visible through the window only if you craned your neck. Nina wished again she’d had time to prepare, to clean, so that she could have reunited with Jess from a position that projected power, evinced a life that said, I’ve hardly thought of you at all.

Reprinted with permission of Blackstone Publishing.