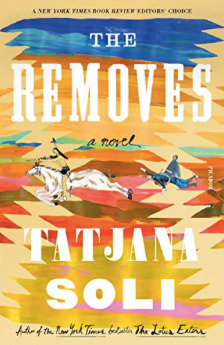 He took us out weeks too long, to the most barren desert prairie, drove us to the point that the bone-wracked horses fell over from exhaustion and lack of food. Far from considering this a loss we counted it a bonus as at least we’d have nourishment that night. After eating we were still every bit as hungry. The men were on the verge of mutiny until the Indian trail was found, and then as if by magic Armstrong was again hailed a hero. Not to my thinking, but I had learned the hard way to keep my thoughts to myself. Glory like gold-fever blinded men.

Much to his credit, Armstrong managed to negotiate the captives release without bloodshed. Once we had the women, we immediately headed to the closest fort.

I’ll never forget the look of the soldiers on duty when we passed our way through the perimeter fence. A few men in undershirts on their way to the barber, stopped to stare at us while still holding their bowls of lather.

We were a rough-looking bunch: Half of us mounted, the other half walking as their horses had died on them; burnt dark as Indians; our clothes in tatters; our boots fallen apart. We inspired apprehension.

What amazed me, though, was the appearance of the stationed soldiers. They had cheeks as full as pillows. I could not understand why they appeared puffy and bloated, why they moved so fast and spoke so loudly. It was as if the fort was under some spell. It gave me the most unnatural feeling. Only later did I realize that these men were not deformed at all, but it was we who had become the circus act. Cadaverous, filthy, weak, starved, the soldiers could not tell us apart one from another any more than one could tell apart skeletons on the prairie, which we had just missed becoming.

As I was about to comment on the strangeness in appearance of our hosts, I saw the mess tent where they were unpacking supplies. A great quantity of hard bread and sides of raw bacon were being laid out. We stood as one, enchanted, and then as one dove down on the supplies like a flock of ravenous buzzards. The men from the fort watched speechless as officers, soldiers, and even scouts stuffed their mouths alternately with bread and raw pork. We ate it all down to the last scrap. For the rest of the month the fort had to make due without either on its menu.--

Reprinted courtesy of Sarah Crichton Books.
To learn more about Tatjana and her book, go here.