The Root of Everything & Lightning 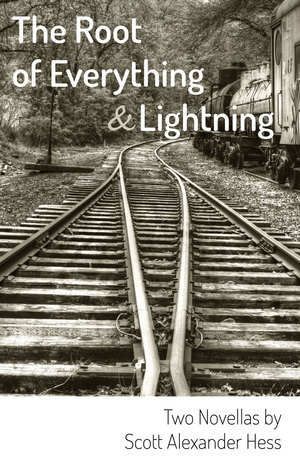 I didn’t know nothing about a proper burying in the earth. Still it had to be done. I fetched an old shovel and a pitchfork from the barn cause that’s all we had. I didn’t want to get to digging right off so I stood still and got a look at my horse in his stall. His face was still and his eyes clear and sad like he knew. I wanted to press my face to him and just rest there, but I had the death work. I went out to the field where we were gonna do it. Jerky and the Potter brothers were waiting on me. It was dusk by then. The Potter brothers weren’t much for hefting anything other than a moonshine jar, but they were fond of telling anybody who’d listen how to do things.

“Gotta get in there hard Boy, shove it like ya screwing,” the tall Potter said, jar sipping and hugging himself in the cold while Jerky and I started to dig. “Earth that mean ain’t gonna open up to ya without a fight, just like a woman.”

“You shut it. He lost his Pa,” tall Potter said softly.

We were out in the field behind the house. We’d cleared a good square of snow and had set to stabbing icy earth. The shovel barely made a dent but I kept on. In the distance I could see Ma in my bedroom window watching with Jerky’s Ma, their small heads together. I’d always been afraid of this field, like it held the dead. Now it would.

“Damn it Boy, give it to me,” tall Potter said.

I reached out with the shovel but kept my fist on it as he grabbed it.

He nodded and took the shovel and went at the earth with fast strokes. He was stabbing and huffing, cussing a bit, then blowing out air and making sounds like an animal or a distant runaway train. Then he started yelling.

“Get you, you, you get on,” tall Potter said looking at the ground.

He was screaming, louder and louder, his arms heaving faster attacking the hard earth.

“Come on you, get on that now,” he yelled to Jerky.

Jerky looked on, then started to peck hard with his pitchfork. Soon he was yelling loud as tall Potter.

“Get get get it, come on get on her, deee haaaa!” tall Potter said and Jerky said it too, repeating.

They were swaying like crazy scarecrows come alive, yowling all sorts of stuff, and the earth looked like it just had to give soon. Finally it started to crack a little and then dumb Potter started screaming too and jumping up and down and then I heard myself, my voice going deep and ragged and joining in.

“Get it, get get get, deeee haaaaa!” I said and was on tall Potter, my hands over his, our bodies side by side, both a hold of that shovel and punching at the mean black crow dirt.

I forgot the cold and my mind flew on while I screamed, while we all screamed, and I forgot about Ma at the window. I felt dizzy and my head was buzzing, like some set of insane flies had crept in there and were dancing, and in this death rush I knew I could forgive anything I’d been holding deep at Pa. I felt Gran at my arm too, pressing. We ranted like derelict preachers, all four of us, caught in a cold crazy jig, and the earth finally heaved inward and gave all the way, letting rise its softer, female under-blackness that would let us keep pushing until we went deep enough to bury my Pa. As the earth shifted I heaved out a rail of dumb tears and I wailed my grief loud enough for heaven to hear.

To learn more about Scott and his work, go here.