The Subway Stops at Bryant Park 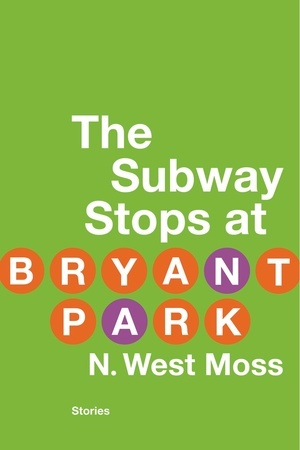 Excerpt from “The Absence of Sound” in The Subway Stops at Bryant Park by N. West Moss

Timothy walked quickly through the tunnel, up two sets of stairs, and then over to the main part of the library, just below the first floor. He slowed as he reached the busy lobby toward the Fifth Avenue entrance near the famous lions, Patience and Fortitude, and stopped near the top, peering up into the crowd of people; the guards at the revolving door checking bags, the sunlight pushing weakly in, the homeless man who came in every lunchtime and slept in the reading room for an hour, and dozens and dozens of people looking up and zig-zagging unpredictably in and out toward the main exhibit, or up the stairs or toward the gift shop, just like the birds in the park.

He blinked and tried to soften his face, knowing that he would look spectral to anyone who turned and saw his pale, startled head floating there. He imagined how scary that might look, and forced himself to keep moving up. And as he thrust himself forward up the final stairs, his shoe-tip caught the lip of the top step.

For just a moment.

Up through the air.

Melanie’s book flew, too, up above him, the pages fluttering, and he thought how the book looked like the bone in “2001: A Space Odyssey” tumbling end over end. Timothy reached his hands out as though he were an athlete of some kind, a quarterback maybe, and caught the book as he slid under it along the stone floor and came to a halt, his eyes shut, his heart pounding, time returning to normal speed. He could hear people gathering around him cooing, and wished he could melt away under the eyes that he felt feel staring down at him.

“You alright?” It was a woman’s voice nearby. He opened his eyes. A pale fiftyish woman leaned over him, her eyebrows knit in worry, her lips a bright matte-orange slash in the middle of her face. Her hands were fluttering like moths around him. She knelt down next to him and for the second time that day, he felt a blush rising up in him as he lay there clasping Melanie’s book. “You ok?” she said, patting his hand.

She’d touched him. He became very very still. “You ok?” She was smiling and he felt a surge of love well up in him for the pumpkin orange of her lipstick and the way she had no real chin, and for her hands, trembling like bird’s wings do when they are in a bird-bath.

He blinked once, twice. “My cat died last night,” he told her. There, he’d said it, and could feel the bones in his rib-cage loosen. She leaned closer and her lips made an O. “She was curled up in a ball this morning, her tail over her nose.” And then, as though she had asked him a question, he said, “Bipsy. Her name was Bipsy.”

Reprinted courtesy of Leapfrog Press, May 2017

To learn more about N. West and her book, go here.