The Swift Boys and Me 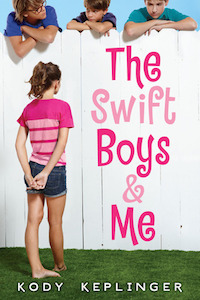 Gotham Teacher Kody Keplinger has recently seen the release of her middle grade children’s book The Swift Boys and Me. It tells the story of 11-year-old Nola and how her world is turned upside down when her best friend, a boy, drifts away from her. After success in the Young Adult world, Kody seems to be doing equally well in the middle grade range, with Kirkus Reviews calling her new book, an “honest and heartfelt coming-of-age tale.”

Here’s a glimpse from the first chapter:

I never told the boys I saw their daddy leave that night.

I was outside getting the mail for Mama. I was supposed to check the mailbox when I got off the bus in the afternoon, but it was the last day of sixth grade, and I was so excited to be free for the summer that I’d completely forgot about the mail. It was always just bills, anyway. There was never anything for me except on my birthday or at Christmas, when Mamaw and Papaw sent me cards in brightly colored envelopes. Mama was insistent that I always check the mailbox, though. She said those bills I thought were so boring were important—that’s how we kept the lights on.

But I’d forgotten that day, so when she looked on the coffee table and saw there was nothing there, she asked, “Nola Baby, did you get the mail?”

It was late—already past nine—but since it was the last day of school and all, Mama had agreed to let me stay up until eleven. So I was sitting on the couch eating a big bowl of strawberry ice cream and watching Cartoon Network. “Um…” I said. “I think I forgot.”

“It takes all of three seconds to go out there, open the box, and come back,” she said. “Your ice cream won’t melt.”

I sighed, all heavy and dramatic—the sigh that always made Mama say things like “Lord help me, I’m about to have a teenager on my hands.” She still had eleven months before that happened, though, so I didn’t know what she was talking about. What did my sighs have to do with being a teenager? My friend Brian was a teenager, and I never heard him sigh.

I went outside, barefoot, in my T-shirt and shorts. The concrete was warm, even though the sun had set. My teachers in elementary school said that May was still technically spring, but it might as well be summer in Besser County. It had been in the nineties all week, and even at night the humidity was so bad it made my ponytail frizz into a big brown pouf the second I stepped outside.

Mr. Swift was already in his car with the engine running as I made my way down the sidewalk. Even though we lived in a duplex—which is basically two houses smushed together into one, but separated by a wall on the inside so two families could live there—we didn’t share a driveway. Mama and I had one leading to our side of the house and the Swifts had one leading to theirs. But they were close enough to each other, only our front walks and some grass between them. Mr. Swift started backing down his driveway just as I opened the mailbox.

There was nothing in it, so it had been a wasted trip. I shut the little door and looked up. Mr. Swift’s car—a silver Saturn—was turning onto the road. I figured he was running an errand, like going to the grocery or the hardware store or something. I guess I should have realized that most places were already closed. Our tiny little town shut down at about eight every night. But I didn’t think much of it, seeing him leaving.

And he waved back.

I found out later that was more of a good-bye than his boys ever got.


Reprinted with permission of Scholastic Press.

To learn more about Kody and her book, click here.