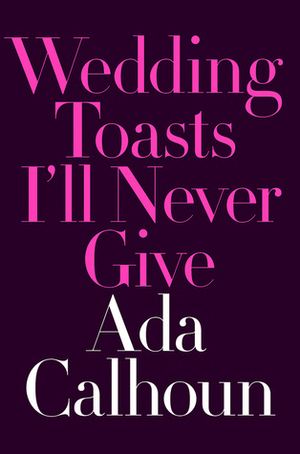 I never give toasts at weddings. I prefer to sit quietly under the twinkling lights, enjoying other people’s efforts. Some are perfect mini-sermons—but better, because at the end there’s champagne. Some go rattling off the rails, and that’s fun, too. At a wedding I attended recently, one groomsman paused in the middle of his toast and—unable to remember the rest of what he meant to say—just sat down.

Finding something new or helpful to say about marriage feels borderline impossible. “It’s difficult to think about marriage,” says a friend married for thirty years. “It’s like trying to describe your own face.” And so we offer clichéd advice like the dubious Ephesians paraphrase “Don’t go to bed angry.” (Personally, I have avoided many fights by going to bed angry and waking up to realize that I’d just been tired.)

Now in the second decade of my second marriage, I can’t look newlyweds in the eye and promise they’ll never regret marrying. (Well, not sober. Maybe this is why weddings correlate with binge drinking.) I adore my husband and plan to be with him forever. I also want to run screaming from the house because the person I promised to love all the days of my life insists on falling asleep to Frasier reruns.

“The first twenty years are the hardest,” an older woman once told me. At the time I thought she was joking. She was not.

And this is why I don’t give wedding toasts—because I’d probably end up saying that even good marriages sometimes involve flinging a remote control at the wall.

Rabbi Lawrence A. Hoffman says the wedding ceremony ritualizes our grandest hopes for ourselves and for those we love: “The reason that people want to get married, I think, though they may not know it, is they have a sense that marriage means more than just the benefits of life they have already—like sharing an apartment and living together, being sexual partners and that sort of thing. They get to the point where they suspect there is more to life than that; they’re looking for ‘the more,’ and that’s what weddings ritualize.”

The day after a wedding, even if nothing but the jewelry appears different—you’re keeping your names, you already shared a home, a bed, friends—something important has changed. From then on, every day you stay, you keep that vow.

By staying married, we give something to ourselves and to others: hope. Hope that in steadfastly loving someone, we ourselves, for all our faults, will be loved; that the broken world will be made whole. To hitch your rickety wagon to the flickering star of another fallible human being—what an insane thing to do. What a burden, and what a gift.

Such are the thoughts I keep to myself, sitting in rented folding chairs, watching friends begin their married lives. To the newlyweds, I say congratulations, and I mean it sincerely. To say out loud the rest of what I’m thinking would be bad manners. And so I’ll say it here instead.

To learn more about Ada and her book, go here.