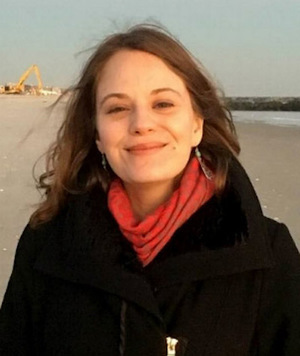 Who do you think you are?

Why do you think you can do this?

You don’t know what you’re talking about.

Sound familiar? That’s Gotham teacher Alanna Schubach’s “inner-asshole” talking, and perhaps you have one too. “I think most writers have this inner critical voice,” Alanna says and as a teacher, she advises her students on ways to “make it shut up.” She’s found that this negative voice usually comes from a fear of failing. “I think once you get to the root, that you’re scared, it’s easier to push through.”

The inner critical voice is just one topic that Alanna covers in both the fiction and nonfiction classes she teaches. And she teaches it all because she does it all. She works professionally as a journalist and has been writing imaginative stories since even before she could write them down herself.

When she was young, her mom would make little books out of construction paper. “I would dictate stories and she would write them down and I’d draw the illustrations,” recalls Alanna. This was on Long Island, where she grew up. After high school, she left New York to attend American University in DC, where she studied print journalism. “We didn’t have digital media the way it is now,” she says of the major and then adds, “I thought I should do something practical.”

After graduating Alanna decided to follow her creative side and returned to New York to get her MFA in Fiction Writing at Sarah Lawrence. Once she’d completed the program, she cobbled together a bunch of random jobs, until one day she decided to change it all by applying to teach English in Japan. At the time, all she knew about Japan was that she liked Japanese food and Kurosawa movies. “But I was like that’s enough. That’s a reason to go there.” She had planned to be gone only a year, but ended up staying for three.

Since moving back to the States, most of the Japanese she learned while abroad has been lost, but her love of teaching remains. “It’s a really big privilege to read people's creative writing because they’re giving you this glimpse into their lives that is private and very vulnerable,” she says.

Aside from teaching, Alanna works as a journalist for Brick Underground, as well as freelancing for the Village Voice, Atlantic, and Jezebel, among others.

While both fiction and journalism are both writing, she looks at them in completely different lights. “Freelance journalism,” she says, “is like putting together a puzzle. You have the research you’ve done, and the people you’ve interviewed, and this huge array of information at your disposal.” Fiction writing, on the other hand, “just feels like you’re lost in a dream or something.”

She also adds that fiction is “kind of something that can be infinitely postpone-able. You could always be like I need to clean my kitchen or you know get another gig.” She fights these urges and writes as often as she can. Now she says she schedules her fiction writing in advance. She says to herself, “‘Okay, I’m going to write at this time,’ and treating it as really sacred.”

This tactic seems to be working out for her. In 2015, she was named a Fellow in Fiction with the New York Foundation for the Arts and she recently signed with her first agent.

When Alanna’s not writing, or helping her students fight their inner-assholes, she’s out exploring Queens, where she lives, not surprisingly, but mainly because of the diverse range of ethnic food. When asked for a suggestion, the first thing that comes to her mind is the Greek community, but then she trails off… there’s just so much.