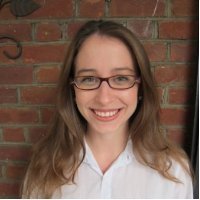 As a kid, Gotham teacher Alexis Schaitkin played with Paint by Number kits (numbers indicate both the area to paint and the paint color). In college, she returned to the 1950s cultural phenomenon as a way to relax in the midst of tests and term papers, and later, even wrote an essay about it for the Southern Review’s “Americana” issue.

But her interest in art went far beyond completing an elaborate Swiss Chalet picture kit during finals week. Alexis actually painted her own works of art, and one summer even worked in Giverny, France at Claude Monet’s garden, immortalized in many of his paintings. “I was trying to do impressive-sounding things,” she laughs, “but I really just wanted to play in the dirt.” (Alexis spent another summer working on a farm, presumably to play in more dirt.)

While she loved painting, Alexis chose to dedicate herself solely to writing, partly because art wasn’t her strength. Alexis points out that flaws are easier to recognize in a painting. For example, she says, “When you paint a person and their hand looks distorted, you know you haven’t totally succeeded. When you’re going for realism, your limitations are very easy to pick up on…I think in writing, it’s less clear.” Plus Alexis loved the simple act of storytelling.

The day after Alexis graduated from college, she traveled to Thailand to teach literature to university students. Unlike other Thai cities, Chiang-Mai (where Alexis lived and worked) is a modest-sized city of just 200,000 laced with ancient temples, street food cards, a population of expats, and what Alexis calls “a college town feel.”

When she first arrived, Alexis taught an ESL (English as a Second Language) class to hotel management majors. While they weren’t studying Chaucer or Shakespeare, those students did improve their English—a skill vital to their industry. In fact, Alexis designed an apropos final exam for the future hospitality leaders: to lead a walking tour ofChiang-Mai.

To this day, Alexis still considers Chiang-Mai her favorite place, with Charlottesville, Virginia a close second. Alexis attended the University of Virginia where she received her MFA and taught creative nonfiction. Her students wrote on a multitude of topics, from living in a commune to the state of broadcast radio in Liberia.

Alexis found both of her favorite cities to be small and quiet, two qualities she prizes.Jokingly, she says, “I think I judge cities by their cafes.” Wherever Alexis traveled, she always tried to find a good cafe to write in. “But,” she says, “it’s a fine line between documenting and experiencing.” She explains that her travels yielded many things to write about, but she found it overwhelming to process the events as both a person and a writer. In the end, it was smarter to simply journal her observations and save the processing for when she returned home. (And, of course, the cafes were still good for journaling.)

After years of adventuring, Alexis is back in her native state of New York, happily married, and at work on a novel. But she hopes she isn’t playing it too safe, at least when it comes to her characters. She often advises her students, “Don’t rush to your characters' defense. Let them do bad things, let them get hurt, and let them sit with the consequences.”