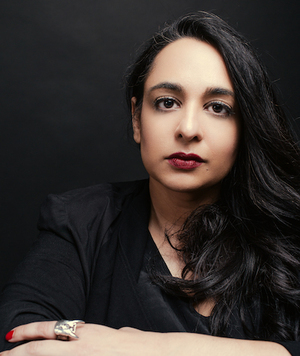 “I wrote a book where I murdered everybody in the fashion world. I felt like I murdered my old self too,” admits Gotham teacher Amina Akhtar, whose professional bio currently situates her as a “former fashion writer and editor.” For four years, she’s lived twenty miles outside Sedona, Arizona, “on the side of a mountain, in the middle of nowhere.” Surrounded by red rocks and forests of conifer, Amina says she sees, “coyotes, javelinas, and bobcats, more than I see people.” The scene is in stark contrast to her erstwhile city life.

Before the desert, Amina worked in New York as a fashion journalist. An NYU graduate, she insists luck played a big part in her early career. “I got a job freelance fact-checking at Vogueand I was doing that for about a month and half, when an assistant position opened up,” she recounts. “I just slipped my way in there.” Indisputably, more than luck is required in working at Vogue, Elle, Style, NYTimes.com, and NYMag.com, where Amina launched The Cutblog. It required stamina, too. “The majority of fashion people are tall, thin, white women, even behind the scenes,” she continues. “Thankfully, that’s changing, but in 1999, I was told to my face, ‘You’re the diversity hire.’”

After over fifteen years in fashion journalism, through the early-aught print-to-digital transitions and industry-wide layoffs, Amina says the business felt too precarious. Her mother passed away and “I kind of wasn’t leaving my apartment, as it happens when you have a huge life crisis.” She needed something to focus on. She began writing a novel.

“It fulfills me in a way that nothing has before,” Amina says about writing fiction. It goes without saying that the pace in Sedona is gentler than New York City’s competitive journalism empire. She moved to Arizona, where her parents lived almost fifteen years, to be with her widowed father. What bloomed from there, from a place of grief and change, was a desire “to learn how to just be and to just write.” Speaking on her routine: “I feel like I’m doing a lot less. Building in a few hours to do nothing feels like the most decadent thing.”

When pressed on the experience of transitioning from nonfiction to fiction writing, Amina observes, “One realization you have is ‘Oh! I can totally make this up!’” Although that freedom can feel limitless as the desert grasslands, it can also feel overwhelming: “There’s almost like a surrender, you have to give up control,” she advises. “Let it happen.”

Part of giving up control is finding the time to slow down. “A lot of writing isn’t writing; it’s daydreaming, it’s thinking, it’s literally staring at the ceiling, it’s letting your brain shut down for a while,” says Amina in regards to her process. And how might one channel such languorous wondering and wandering into a story? One piece of advice Amina offers is to keep a notebook, “Or—I use my phone and the notes app, and right before I fall asleep, that one line or idea pops in… Turn on the light and write it down.” “Do that,” she insists, “because you’re not going to remember it and it’s something you can probably use.”

Before Arizona, before New York Fashion Weeks, and killing her old self in a novel—there was Texas, and there was 6-year-old Amina writing a short story for class about a lost bear. “We were supposed to turn them into little books,” Amina recounts, “and the teacher lost all of them. I was looking forward to having that copy in my hands!”

“Honestly,” she says half-jokingly, “that prepares you to be a writer because you need to be able to deal with disappointment.”