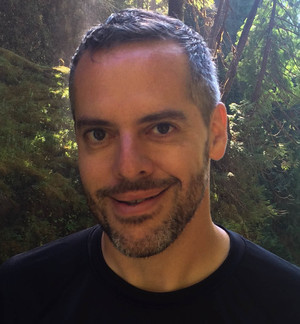 “Home is where the cats are,” says Gotham teacher and travel writer Andrew Collins from a cheerful courtyard via a Zoom screen where he sits beneath a bright red umbrella. For a writer who edits and publishes travel guides, including the first mainstream LGBTQ travel guidebook, home is a collage of places which provide inspiration for his work— currently, Mexico City and New Hampshire.

Andrew caught the “nomad bug” while living in London and exploring Europe during college. Following graduation, he planned to become a teacher but decided to give the publishing industry a try. This decision turned out to be serendipitous when Andrew was hired by Fodor’s, one of the oldest and most storied travel guide publishers. He began at Fodor’s as an assistant editor, and, after a couple of years, realized that as much as he liked editing, what he really wanted to do was travel— and write about it.

“I could be out there, instead of in this office,” Andrew says of making the decision of moving from the editing world to freelance travel writing, “And so I quit my job when I was 23, and decided…kind of stupidly, but also glad I did it, I'll just become a travel writer. And I couldn't afford to pay rent doing that, so I didn't live anywhere for seven years, I just floated.”

Andrew’s decision to hit the road paid off— he’s written and edited many of his own Fodor guides as well as Destination Pride, a guidebook to planning an LGBTQ international vacation, and in 2017 International Gay and Lesbian Travel Association (IGLTA) named Andrew as the Travel Writer of the year. His newest book, Ultimate Road Trips: USA & Canada, provides detailed itineraries for over thirty routes and adventures, many from his ongoing effort to visit every county in the US.

Andrew has had some adventures along the way. “I was driving through South Dakota four years ago, and alerts of a snowstorm are coming in,” Andrew says, “and they were going to close the interstate.” Andrew slid into a snowdrift in a tiny town in front of a church. Luckily, the minister of the church and her partner lived in a house attached to the church. “They really wanted to help. But they also were a little weirded out. Like, okay, this guy's a total stranger… I came inside for a little bit to warm up and I started playing with their two cats, and one of them whom doesn't like people started playing with me, and they were like, alright, he likes you, I think you're okay, so I ended up spending the night and we talked a long time.”

From a small-town minister in South Dakota to international students in his online writing classes, connection seems to be an important part of Andrew’s writing. “That kind of experience has been very instrumental,” he says, “Making a connection and developing a greater empathy for people and not making rapid assumptions about people.”

Although Andrew spends much of his writing life exploring the coast of Oregon or completing a cross country road trip, he underlines the importance of writing about home. “I'm always trying to make this point that you should be looking in your own backyard as much as anywhere,” Andrew says of travel writing.

And he is, literally, speaking from a Zoom screen in his backyard, which is just as vibrant and colorful as his writing— a package is dropped off for a neighbor and Andrew’s partner waves goodbye as he heads out to the mercado to buy fruit. Like Andrew’s writing, this glimpse into a backyard in Mexico City paints a detailed picture of a faraway place while emphasizing that lovely necessity of connection.