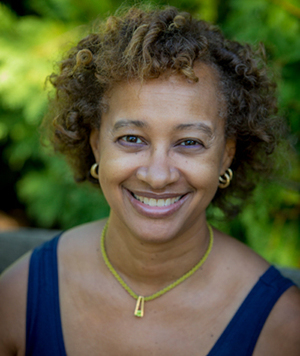 “When you have the threat of imminent death,” says Gotham teacher Angie Chatman, “you’re like, all the things I promised myself that I would do, I better do them now. It’s like a warning.” Angie is familiar with the ways personal and global crises have the potential to alter the course of one’s life and turn it toward art.

Originally from Chicago, Angie says she wasn’t a writer as a kid. Being an artist didn’t seem like a viable career path and eventually she pursued an MBA from the Sloan School at MIT. It wasn’t until many years later, after the death of her brother, the birth of her daughter, and 9/11, that she focused her sights on writing.

Two truths became undeniable: life was too short, and, to set a good example for her children, she had no choice but to follow her dreams. So fifteen years after receiving an MBA, Angie pursued an MFA in Fiction and Creative Nonfiction from Queens University of Charlotte.

“You want your kids to be happy,” says Angie. When her daughter chose to study filmmaking, Angie admits that she was apprehensive. “Oh my God! How is she going to eat?” she worried. “But I know I don’t want her to waste the fifteen years I did, figuring out that this is what makes her happy.”

Now Angie is working on a collection of short stories. As she writes, the through-line that connects the stories emerges piece by piece. “Writing is a puzzle,” explains Angie. “And you don’t have the box-top, so you have no idea what it’s going to look like. That process of discovery is what is so wonderful about art.”

As a mother of three, Angie values taking time for herself. Thanks to her own mother, who generously took the kids for a week every year when they were young, Angie could participate in a different writing conference each summer. Now, she attends as many as she can afford, either as a writer or teacher.

One such conference was HippoCamp, where Kelly Caldwell, Gotham’s Dean of Faculty, enrolled in Angie’s workshop on food writing. After the conference, in a friendly email exchange, Angie told Kelly she’d love to teach for Gotham, to which Kelly replied, “We’d love to have you!”

What’s clear when talking to Angie is that she knows how to tell a story, and not just on paper. One summer, at the Community of Writers in California, Angie met a friend who got her into oral storytelling. “She really wanted to do The MOTH. She told me, ‘Why don’t you come with me to a class to learn how to pitch better?’”

Their teacher turned out to also be a producer at The MOTH.“She was like ‘That’s a fabulous story, come tell it.’” Soon after, Angie did. Since then, she has performed for StoryCollider, MassMouth, Tell-All Boston,and the television series Stories from the Stage.

When asked what drives her to continue writing the stories she wants to write, Angie tells a story:

“My husband and I were in a heated discussion, also known as a fight, and he stopped in the middle of it, ‘Have you written anything lately?’ I’m like, ‘You know, that’s the problem with you! You change the subject! What does my writing have to do with it?’

And he said, ‘You’re happier when you’re writing.’