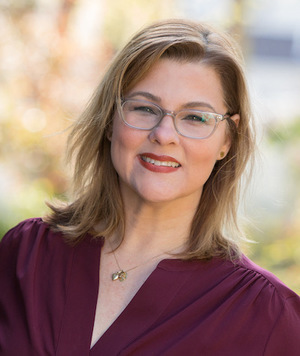 Gotham teacher Arlaina Tibensky claims her inner voice is that of a teenager’s. “I really like teenagers,” she says. “They have a very pure energy, a very creative energy. It’s all possibility.”

In fact, Arlaina’s first book And Then Things Fall Apart takes place inside the mind of a teenage girl. The girl, Keek, battles a case of chicken pox while cooped up in her grandmother’s attic with nothing but an old IBM typewriter and a copy of Sylvia Plath’s The Bell Jar. Arlaina chose to write the novel in a challenging form of stream-of-consciousness. “The constraints of the form were limiting,” she says, “but it all worked out in the end.”

Arlaina grew up in the Chicago area amongst an artistic family—including actors, an interior designer, a comedian, and a visual artist. “I’m the only writer,” she says. (She's also the only potter in the family. When Arlaina was in graduate school, she got by selling some of her work at pottery shows.)

Today she resides in the Washington Heights neighborhood of upper Manhattan with her husband and two sons. “On a good day, I write,” says Arlaina. “I turn my Internet off. I can write for about three hours at a pop before I have to do something pressing. A bad day is one where I don’t write at all.”

Understandably, Arlaina attempts to avoid the latter at all costs. “I’m working on fighting that resistance toward doing the work,” she explains. “Real life is intense. To create this fictional world sometimes feels indulgent. But that’s the work I’m supposed to be doing.”

On teaching at Gotham, Arlaina says: “I was afraid teaching writing would sap my own writing energy, but it doesn’t. It makes me respect the art form more.” She also finds Gotham students to be among some of the most serious writers she’s ever taught.

“The pool of students is the whole city. You get a lot of different perspectives on each piece,” she says. “These students get it—they make writing a priority. They make room in their lives for writing as opposed to the other way around.”

If she wasn’t a fiction writer, Arlaina could easily see herself in the shoes of a stand-up comedian. “I think both forms of writing come from the same place: discovering the great truths about being human,” she says. “All writers expose themselves, but comedians especially expose their inner writer on the stage. It’s a dialogue with yourself about how you see the world. They’re just putting it all out there, without a net.”

Currently Arlaina is at work on a novel about a mother and daughter who experience a life-changing safari in early 1990s Kenya. It’s a real departure from her previous work. “It was an opportunity for me to talk about issues that are important to me," she says, "like the environment, marriage, pregnancy, and class.”

“I’m at a certain point in my life where I don’t have a lot of time to read, so I want to write the books I want to read,” Arlaina continues. “I want the books that are going to make me stay up an extra hour at night.”