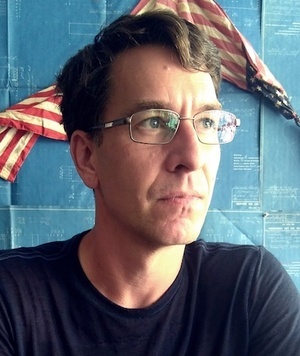 Someone has to write all those interesting facts about emperor penguins in your grade school text books, and for a while, that someone was Ben Obler. Ben’s been cozied up with the writing world for his entire life, whether he was writing those factoids in the education side of publishing, or writing his novel Javascotia, or writing the closed captioning for movies.

“I’ve managed to be connected to words in a lot of different ways,” Ben says.

It started as it did for so many young writers—in high school, writing poetry in a spiral notebook that no one else was allowed to see. Even before that though, he was reading stories in his spare time outside of school. But he hit his stride in college, when he started to be impacted by such short story writers as Willa Cather, Donald Barthelme, and all the books he picked off of his dad’s shelf at home. His dad, who conveniently taught high school English.

This naturally transitioned into a college education that could only unveil one possible career path—writing.

When his short story “Who The Blind” found a home in a small Minneapolis publication called The Slate, Ben found a key piece of his writing methodology—absorption. This time, it was absorbing all those short stories from John Cheever that he’d been reading since he was a kid.

“I tell my students it’s kind of okay to emulate what the other people did while you’re still trying to figure out what you’re doing.”

After working full time in a bookstore while simultaneously trying to establish himself as a writer, Ben wanted dedicated time for his writing, and decided to pursue his MFA at the University of Glasgow. “I never felt like I had enough time to write,” Ben says.

Even when Ben did figure out what he was doing, his creative-thesis-turned-published-novel Javascotia took on a whole new beginning after reading Purple America by Rick Moody. Ben continued to practice what he preached, absorbing reading to benefit his own writing.

Looking back at his path to where he is now, between his father’s occupation, the content of his bookshelf, the journey that led him to Scotland and the multiple steps along the way, there’s no way to avoid the simple truth about his career in the writing world:

“Maybe I was destined and didn’t even know it.”