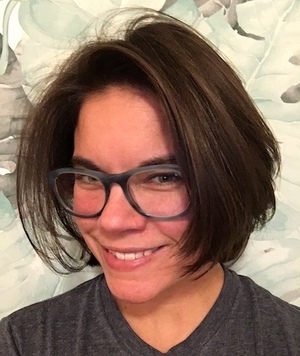 “I’d really like to take poetry down from its ivory tower,” says Gotham’s Britt Gambino. “It’s one of my missions in life, to get more people into poetry who think that they hate it.” This thought is what led Britt to create the One-day Intensive course In(verse): Poetic Techniques for Non-Poets. She knows the idea of this class is a tricky one to market. “Kind of like myself,” she adds. “It’s almost a physical representation of how my brain works, which is a little bit funky sometimes.”

Britt reveals her insecurities and failures just as easily as her joys and successes. She is terrified of teenagers. She kind of likes that people called her and her color guard teammates “flaggets” in high school. She thinks the script for The Matrix is one of the most beautiful pieces of writing ever written. The word ‘freaking’ escapes her mouth emphatically and often. Like she says, she’s a little bit funky. And pretty charming.

From a young age, Britt knew she wanted to write. Like many angsty teenage girls, she found a love of poetry through Sylvia Plath, and from there went on to discover weirder and more nontraditional poets. An only child, Britt’s parents were determined to see her grow to be a better writer than either of them. “They read to me in the womb,” she says and then continued to support her off-the-beaten-path interests.

Second to being a writer, Britt describes herself as a runner. “I think best when I’m running.” she says. “It’s meditative.” Running is new for Britt, as she’s only been doing it (religiously) for a year. As a kid, she took every type of dance class imaginable and enjoyed the workout she got from throwing batons, rifles, and sabers in the air as part of the marching band’s color guard team. She admits to trying to become a runner in college but didn’t know how to go about training herself. Now, it’s second nature to her. “The discipline and patience I’ve learned from writing has really carried over into my running,” she says. “Now they sort of are integrated fully with each other.”

For inspiration, Britt attends book readings, runs, and takes long subway rides. She claims that a good reading for her is when she can’t resist taking out her notebook in the middle and jotting down an idea for a future poem. Her students also inspire her. “The neat thing about the running community is that it’s a lot like the writing community. So many people you wouldn’t necessarily expect.”

Although, she claims to be terrible at science, Britt is fascinated by disease, which is evident in her writing. She has half a chapbook worth of poems about HIV. “Disease,” she says, “is under the umbrella of human frailty. With that goes relationships and unfortunately a little cliché devastation and heartbreak.” It’s not as heavy as it sounds, though. She recommends adding rap lyrics to soften the blow. “A comedian who uses humor to talk about horrible current events. That’s me as a poet.”

Britt has also discovered that she’s funny in class. “It was a nice surprise I am really good at making people laugh.” And she doesn’t feel like teaching is work. “Perhaps, because I like it so much.”

The best advice Britt can give for anything you are working toward, whether it be getting published, accepted into grad school, or running that (half) marathon is this: “Sometimes you just have to be freaking patient, and then it will happen.