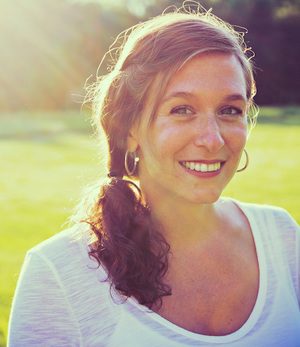 Gotham teacher C.J. Hauser grew up wearing a sweatshirt emblazed with the phrase, “A Good Place to Grow,” referring to her hometown of Reading, Connecticut. She spent her days hiking in the woods and apple picking, activities one might consider classic offerings of New England.

While C.J. grew up in the idyllic countryside, she decided to move to New York City to pursue her goal of becoming a fiction writer. Perhaps as a consequence of her roots, C.J. has a love/hate relationship with the city. But she found that as she moved deeper and deeper into her beloved borough of Brooklyn, she enjoyed the sense of community and neighborhood vibe. (C.J.’s friends joked that if she kept moving, she would eventually end up living under the Cyclone roller coaster in Coney Island.) But she was never attracted to the pressure cooker intensity one can feel living in a place like New York.

While she was studying at Brooklyn College, C.J. found another kind of home in New York. She interned at a literary agency and then took a full-time position as an assistant to literary “super-agent,” Nicole Aragi. (Aragi runs a one-woman show of a literary agency and has had great success with authors like Jonathan Safran Foer and Junot Diaz.)

It was a relief to learn that agents are indeed rooting for great work; there’s no callous marketing scheme, C.J. says. On the flip side of the coin, however, agents and assistants work incredibly long hours at hard, demanding jobs. While it would seem like a fantasy to read all day long, C.J. notes the dream doesn’t quite live up to the reality. “Every day we would read query letters, hoping to find something magical,” she says. Instead, they would uncover pitches that seemed to cater to what the writers believed an agent would want to hear. C.J. assures that “you just have to find the right person” to read your work.

Eventually, it was time for C.J. to return to her roots. She recently tapped into her hometown as inspiration for her first novel, Maritime. “When I started the book,” she says, “I was really focused on place.” Like so many other small towns in America, Reading is changing and becoming more overdeveloped. These sorts of towns used to be cozy; everyone knowing one other. But C.J. points out, “People who live in a place like this are having to deal with unwanted changes.”
Her book takes place in a fictional town in Maine where two women end up for different reasons (one because of deceased parent and the other because her husband is from the town). They meet one another through their jobs at the local newspaper as they begin to uncover town secrets. C.J. calls the book a “second coming of age” story because the women are in their late 20s.

After spending several years in New York, C.J. decided she needed to catch the Metro-North train and head back into the woods. “There’s no rushing or aggression,” she says. “I couldn’t do that anymore.” C.J. and her pet rabbit, Flannery O’Connor, are quite happy there.