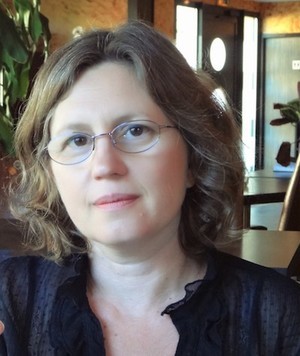 Gotham teacher Carmen Bugan grew up in 1970s Romania, under the dictatorship of Nicolae Ceaușescu. Television was controlled by the state back then. “We had two hours of TV every day,” she says, “which meant we had a lot of time to play outside, to read, and to write.”

Which is why Carmen recalls a “magical” childhood on an idyllic farm near the Black Sea. She was known as the neighborhood scribe who penned love letters on behalf of her classmates, to help them get dates. The dark side, of course, was that the people of Romania had no idea what was happening in the world.

Unbeknownst to Carmen, her father protested against the communist regime, and in 1983, when Carmen was 12, he was imprisoned. Carmen’s family was persecuted for being enemies of the state, and they were forced to live under 24-hour Secret Police surveillance.

“We had these pictures of my father around the house,” says Carmen. “I used to take the pictures, go to the backyard, and write poems to them.” When Carmen’s sister and mother read these poems, it united them in their grief.

In 1988, Carmen’s father was released. A few years later, the Bugans emigrated via a refugee camp in Rome to Michigan, where her family remains today. At the time, Carmen wanted nothing to do with Romania.

When she was getting her PhD at Oxford, Carmen befriended a memoirist who urged her to write her story. Carmen, however, had her sights set on poetry. “I wanted to be known as someone who could do beautiful things with language. I didn’t care about being known for my story.”

Then Carmen met her husband-to-be, an Italian particle physicist, and together they moved to Geneva. She became pregnant with her first son, whom she refused to teach Romanian. The language reminded her too much of the psychological trauma she had faced. But then something shifted.

“The bigger my belly grew,” says Carmen, “the more I was singing Romanian songs and prayers to the belly. Then I thought, oh my god. What an idiot I am. I’m trying to run away from something that is so important.” Carmen would write her memoir. But it would be for her son, explaining how her childhood had been at once beautiful and painful. As the memoir evolved, it turned out to be more of an homage to Romania.

After Burying the Typewriter: Childhood Under the Eye of the Secret Police was published, Carmen continued to write poetry. She then returned to Romania where she uncovered surveillance files that the Secret Police had kept on her family since the 1960s up until 1989. In response to the records—some of which were accurate, many of which were not—Carmen wrote her second memoir, Life Without the Country, to “set history straight.”

Now that Carmen has written herself free, the rupture from her mother country has healed. She lives in Stony Brook with her husband and two children, writing poetry and teaching Memoir for Gotham. Her kids, five and ten, speak four languages: English, Italian, French, and yes, a little bit of Romanian.