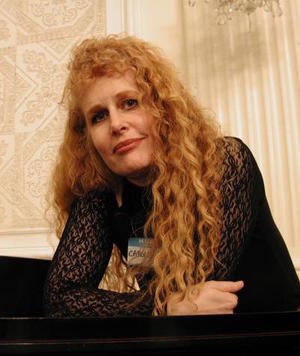 Let’s begin by revealing a secret: the thriller author C.E. Lawrence is none other than Gotham teacher Carole Buggé. And once you get to know Carole, you come to realize that two names might not be enough for this woman. To borrow a phrase from Walt Whitman, she contains multitudes.

Much of Carole’s published work is in the mystery genre. She began writing “Sherlockiana”—newly imagined stories and novels featuring Sherlock Holmes. Then she wrote “cozys”—quaint novels in a series about a literary editor who teamed up with a 12-year-old prodigy to solve mysteries.

More recently, Carole has been writing a thriller series about a police profiler who tracks down serial killers in New York City. The titles so far: Silent Slaughter, Silent Kills, Silent Screams, Silent Victim, and Silent Stalker. (Never mind that Carole, in person, is far from silent.) To write the series, Carole has immersed herself in criminal psychology (even studying it at the John Jay College of Criminal Justice), befriended profilers and cops (one of whom was her Gotham student), and read every reputable true-crime book she could get her hands on.

When asked if it’s haunting to live, even imaginatively, among serial killers, Carole says, “I actually think it’s therapeutic. Living in that dark place during the day means I’m not likely to ruminate about that stuff. I’m of the opinion that thriller writers are well-adjusted people. We write our fears down.”

Next up, Carole is embarking on a historical thriller, set in Edinburgh circa 1881. And, yes, there will be a serial killer on the loose.

But please don’t think Carole (or C.E. Lawrence) is just an accomplished author of murder and mayhem. Oh, no, she is so much more. A partial list:

Poet. She’s a widely published poet, and, if you hurry, you can see her work as part of this poetry/photography exhibit.

Playwright. Among her plays, the critically acclaimed Strings, a true account of three physicists discussing string theory, among other things, on a train ride to London.

Improv performer. In her early days, she made her living performing improv, and on many a Sunday night you’ll find her still doing it at the 78th Street Theater Lab.

Musician. She plays guitar and penny whistle in an “old-timey” jam band. And she also sings with the Yonkers Stompers.

Composer. She has written four musicals (book, music, and lyrics), one of them about Benedict Arnold. And she has set T.S. Eliot’s poem “The Love Song of J. Alfred Prufrock” to music—an art song for soprano, tenor, and baritone.

Mushroom hunter. She claims she is “nothing special” in the real world of mushroom hunters, but acknowledges that around Woodstock (her summer home) she is something of a mushroom star.

Rugby player. She founded the first women’s rugby team in New Jersey, the Montclair Maulers. They lost twenty-three games in a row.

A book that Carole always keeps nearby is Rainer Maria Rilke’s Letters to a Young Poet, which contains another sentiment that sums up Carole very well:

“And the point is to live everything. Live the questions now. Perhaps then, someday far in the future, you will gradually, without even noticing it, live your way into the answer.”