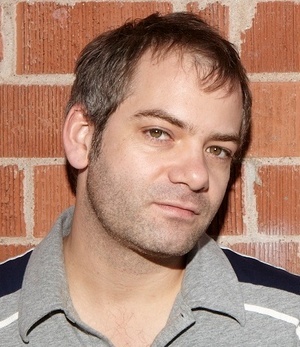 You would never guess it, but Gotham teacher Carter Edwards trained as a mathematician. An unusual path for any writer, but Carter is both a poet and fiction writer, which makes his left-brain background doubly unusual. But then Carter (also known as B.C.—the “B” for Benjamin) is nothing if not unpredictable.

Carter went to Reed College in Portland, Oregon, where an advisor urged him to study math because of his high S.A.T. score in that category. Upon graduation, Carter worked as a computer programmer in Denver, Colorado, which he refers to as his “way station” between Portland and New York. After a couple of years, Carter took the leap, moving to the city of his dreams, planning to become either an actor or writer.

The acting didn’t pan out, but since 2006 Carter has helped run the national touring company for the Upright Citizens’ Brigade, the famous improv organization. Carter, however, claims he’s no comedian. “There’s a big difference,” he says, “between storytelling on the page versus storytelling on the stage.”

As a writer, Carter has flourished. Soon after taking his job at UCB, Carter enrolled in the MFA program at The New School, in the fiction concentration. But he became curious about poetry when he met fellow writer and classmate Stephanie Berger, founder of the Poetry Brothel. (Yes, you read that correctly.) The Poetry Brothel takes poetry “outside classrooms and lecture halls and places it in the lush interiors of a bordello.” Poets replace prostitutes, and private readings replace private sessions in the boudoir. Carter started writing tiny chapbooks expressly for events hosted by the Brothel. He got some of the work published, then realized he didn’t want to stop.

Later, while working on a novel, Carter found poetry kept interrupting his prose. This led to Carter’s first book of poems, From the Standard Cyclopedia of Recipes, which was loosely based on a book of the same name published in 1901. The turn-of-the-century volume contained “recipes” on everything from how to shoe a horse, make cough medicine for kids, and even cure cancer. Carter kept the original title of each recipe, which often served as a springboard for the poem itself.

Meanwhile, Carter kept equal devotion to his fiction. Recently, he has seen the release of his first short story collection, The Aversive Clause. The collection is full of doomed romances, worlds on the brink of destruction, and a whole lot of laughter and despair. As one of Carter’s reviewers, Ryan Britt, shrewdly commented, “The prose here isn’t exactly fancy, but it is precise and lovely which, if I knew anything about poetry, would lead me to conclude poet/prose writer hybrids have their command of words down better than anyone.”

When asked how he balances his relationship between poetry and fiction, Carter laughs and says, “I don’t balance them well.”