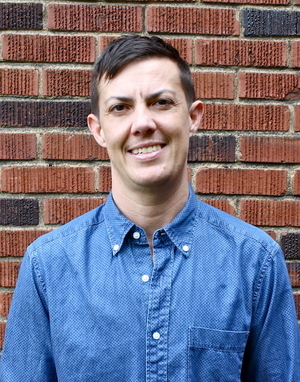 
You might think that folklore is all about tall tales, but Gotham teacher Carter Sickels would beg to differ. In addition to legends, fairy tales, and jokes, folklore also includes the exploration of cultures and subcultures. That’s where Carter comes in. His recently released novel The Evening Hour takes the reader on a journey through several diverse subcultures that Carter stumbled upon, one after another.

Carter’s interest in folklore happened by accident. He had intended to pursue a Ph.D. in Creative Writing, but as he researched schools, he discovered a folklore program at the University of North Carolina at Chapel Hill. Carter was intrigued by folklore because it offered the possibility of working with various communities.

During his degree work, Carter stumbled upon his first cultural exploration. As part of his graduate thesis, he conducted a series of interviews with transgender males in the Chapel Hill area. “I’ve always been drawn to issues of masculinity,” Carter says. In fact, Carter’s recently released novel The Evening Hour explores different kinds of intimacy between men.

The impetus for the novel’s main character, Cole, stemmed from a New York Times article about a kid who bought prescription drugs from the elderly in his southern community and resold them. Enter subculture number two: prescription drug dealing. Cole works in a nursing home, but makes his “real” living at selling drugs in the outside world. These opposing professions give Cole a complex duality: he manages to act as both caretaker and harmful enabler all at once. Throughout the novel, Cole interacts with an unusual cast, including an openly gay ex-con and an octogenarian environmentalist.

After he decided to set the novel in West Virginia, Carter visited the state and the surrounding Appalachia region to do research. And, unexpectedly, he discovered a third subculture: the industry of mountaintop removal coal mining. He explains, “Instead of going underground to mine coal, it’s become easier to blow up the mountains.” Carter met with the grassroots environmental group Coal River Mountain Watch, and met people who lived in the region whose lives have been affected by the devastation. Some of them even invited Carter to stay with them in their homes. Although he didn’t expect to include coal mining in his novel, Carter says he just felt compelled to write about it. Cole’s character manages to avoid going into the profession, but the effects of the industry are present throughout the story.

Nowadays, Carter is in the world of nonfiction, working on a series of personal essays and vignettes. You might say he has turned to yet another culture: himself.