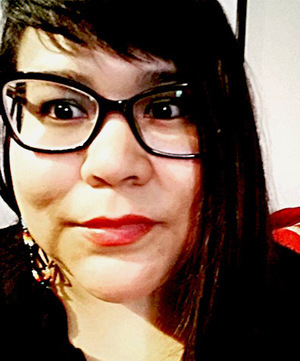 Poet, editor, and Gotham teacher Casandra Lopez’s passion for writing and natural gift as a storyteller is evident in the way she speaks about her work and the literature she loves, but she wasn’t always a writer. Casandra got her start as an apparel designer in Albuquerque, New Mexico.

“In apparel design and any kind of arts, you really need to have a vision and a passion to be successful and get where you want,” Casandra says about her experience in design. “I realized I didn’t have that [for apparel design], but I do feel I have that for writing.” When she told her mom that she was changing course and becoming a writer after studying design, her mom’s response was, “You’ve always been a storyteller.”

Like George Saunders in an oil field, Harper Lee selling airline tickets, and Haruki Murakami opening a record store, Lopez brings a life lived to her writing and it shows. “I came to writing a lot later in life,” she says, “But I was always an avid reader.”

Her ability to flex a variety of creative writing muscles is evident in her work, which is not limited by genre. Her first book of poems, Where Bullet Breaks, was written in response to the grief she and her family experienced following her brother’s murder. This collection, which she worked on during her time in her MFA program, is a poignant study of grief and memory. It was awarded the Native Writers Chapbook Award from the Sequoyah National Research Center. However, Lopez isn’t just an award-winning poet-- she’s now working on a memoir that expands on her study of grief by examining historical violence to Native people and her own family’s experience with violence and colonization.

“The book I’m writing now is a memoir,” Casandra says. “It takes a lot from history. I read a lot about California history, indigenous history, my family’s history.” Her process includes much sifting through academic work and photographs and learning how to compile research. “I’m trying to write against historical and family silences,” Casandra says.

Casandra’s enthusiasm extends into her work as a teacher. She especially enjoys teaching classes that are comprised of people coming to writing after starting families or post-retirement and that her classes routinely include students aged sixteen to eighty.

“I remember when I was dipping my toes in,” Casandra says about her students. “You could be spending your time doing a lot of other things, but you decided to come here and take a poetry class. This is what you decided to do with your time and I think that’s really cool.” She also tells her students that writing can be a tricky undertaking: “Sometimes it’s not a straight line and that’s okay. You might fumble around.”