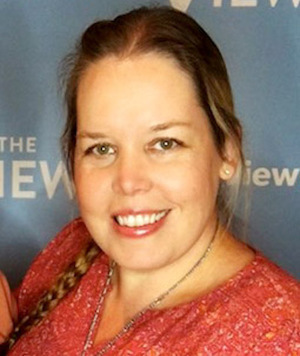 You could point to any number of the female characters in Gotham teacher C.C. Webster’s films. Or the gritty ladies of New Cumberland, PA, who raised her.

C.C.’s Swedish grandmother was one of them. A “vociferous” reader, she passed a young C.C. the reading bug. As a girl, C.C. also loved to enter Scholastic writing competitions, and journal.

Being from a working class family made it hard for C.C. to imagine writing as anything but a hobby. She was also the only one in her family who went to college. “I assumed I needed to get a job job,” says C.C.

She landed that job job, doing corporate cash management in Boston for what is now Bank of America. It wasn’t her cup of tea, and after four or five months, a disinterested C.C. called it quits.

As she was figuring out what to do with her life, C.C. went to Stockholm. She lived there for a while to learn the Swedish language and culture of her family. Her uncle lived close by and was an actor, and in her free time she tagged alongside him on film sets. He introduced her to his friends and colleagues—living, breathing artists who were making a living. That flipped a switch in C.C.

She applied to film programs, and accepted an offer from Columbia University. There, she wrote and directed a short film called “Tracks” about a “bear of a woman” named Frizzy, who tries desperately to get rid of her late father's lemon of a car.

A year later, C.C. received a grant from Lifetime to direct another short she’d written—not surprisingly, set in a small Pennsylvania town with a predominantly female cast—called “Civil War”. Both shorts were inspired by her hometown and its resident women—gruff, tough, and raunchy, but also good-hearted.

“Civil War” was selected to be screened at over twenty festivals worldwide. A thrilled C.C. and her producer hopped into C.C.’s beat-up Saturn and trekked to festivals all over the country, to represent the film. What was strange to C.C. was that none of the festivals she went to ever partnered with drive-in theaters in the area.

“I’ve always been a drive-in fan,” confesses C.C., who likens the drive-in owners to her tough-talking, lovable Frizzy. To fill the gap, C.C. founded the Drive-In Film Festival, which will see its tenth season next year.