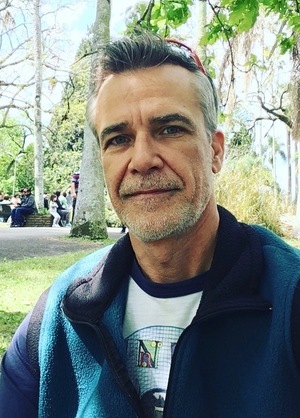 
Gotham Fiction Writing teacher Chip Livingston loves crossing borders, having written in a variety of genres and lived in a myriad of locales. In fact, Chip is about to pack his bags and move to Montevideo, Uruguay. (More on that later.)

Chip, the son of an English teacher, studied journalism in college, but just as he was graduating, he had a change of heart—he wanted to write fiction. Chip says, laughing, “My advisor was upset to ‘lose me’ to creative writing, but was happy that at least ‘those creative writers would get some grammar’!”

He pursued his MA in Fiction amid the snowy mountains at the University of Colorado. A visiting writer, the poet Ai, dared him to take a poetry workshop with her. Chip took the bait and his love of poetry took off. “What I thought I didn’t like about poetry was that it was coded, hard to figure out. My purpose in writing was to be accessible, but then I realized poetry could be narrative.” (In fact, he has a piece entitled “Ghost Dance” that’s been published in both fiction and poetry anthologies.)

Chip went on to take a teaching position in the Virgin Islands. While living in the Caribbean was paradisiacal, he began to feel isolated after a few years. Upon the suggestion of friend, Chip decided to move to New York.  He found work as a personal assistant for the poet Kenward Elmslie, one of the founders of the New York School of poetry. “I decided I wanted a formal education in poetry,” he says.  “I didn’t know the history and the different forms.” And so he studied poetry at Brooklyn College. (Chip is currently working on a memoir about his experiences with Elmslie.)

Chip has written two books of poetry, but recently had his first poem published in Spanish, a language in which he’s fluent. In addition, Chip says, “I’ve translated three small volumes of a poet from Uruguay, just for myself.” And when he moves to Montevideo, he may take up teaching English to Spanish-speaking students.

The original idea to move to South America came to Chip when he and a fellow writer friend were thinking about going to Chicago for the annual AWP (Association of Writers & Writing Programs) conference. After concluding that visiting the Windy City in February wasn’t appealing, they decided to travel to Argentina instead. Chip loved what he found there.

“Montevideo really idolizes its writers,” Chip says. “They have statues of poets, streets named after writers, and it’s not just decoration.” Chip notes that most of South America is quite proud of its literary history, remembering a plaque he once saw in Buenos Aires that read: “There is no city without poetry.”

Even ethnically, Chip crosses borders, being of Native American descent on his mother’s side. “I never considered writing Native American literature,” he says. “I’m from a small southeastern tribe.” But then he met well-known Native American writers Linda Hogan and Joy Harjo and thought, “Creek Indians can write about being Creek Indians? It was a real eye-opener.”

It’s almost fitting that Chip feels that being part of a culture that never recorded stories or songs gives him more freedom to write outside a category. He sees more lines being crossed—for example, magical realism in Latin American literature. “Of course,” he points out, “We call it ‘magical realism,’ but they would probably just call it realism. It’s just the way they incorporate different aspects of the world.”