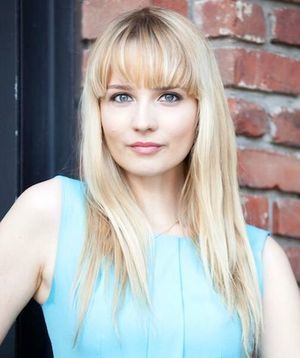 “I carry the compulsion to record every original thought that occurs to me,” says Gotham teacher Christine Reilly.

Because of this urge, Christine can tell you about any given day, going many years back. Journaling is just a part of life for her, for which she thanks her fifth grade teacher, Mrs. Herzog.

Mrs. Herzog was just one of the many people who encouraged Christine along her way. Even before she could write, she was entertaining her family with her imagination. “My grandma was my original transcriber,” she says.

Bookended by brothers as a kid, Christine was a self-proclaimed tomboy who enjoyed playing sports and riding her bike, but her real interests were in all things creative. Besides journaling, Christine recorded her world through the lens of a 90’s video camera, she and her friends creating their own movies. “Mom and dad,” she says, “thank you for letting me march to the beat of my own drummer.”

With so many people cheering her on, it’s no surprise that Christine ended up in New York City pursing her creative dreams. “In my opinion, New York’s the most inspiring place in America to write,” she says. And write she does, for up to five hours every day.

On the road to success, Christine made a pit stop as a Gotham intern while she was in college. Now, with her MFA from Sarah Lawrence, she is back—this time teaching Creative Writing 101 and Fiction Writing classes. She says, “The writing workshop is often my favorite room in the world to be in.”

Her compulsion to record thoughts is matched by her compulsion for exercise. “I’m addicted to physical activity,” she says, “I need the time every day to get out of my head and be present in my body.”

This month, Christine sees the publication of her first novel, Sundays on the Phone to Monday. “I still can’t buy that it’s real,” she says of the book’s publication and adds, “I enjoy holding it.”

For Christine, poetry is her backbone. Eight years ago, when she started writing Sundays on the Phone to Monday, it began as a book of poetry. As she says, “You can take the girl out of poetry but you can’t take the poetry out of the girl.” Although the books has transformed into a novel, many of the characters remain the same from her original idea.

Both in the past and present, it’s still the little details that matter most to Christine. “I consider myself a poet’s writer,” she says, “and write on a very small scale with immense attention paid to each word and less paid to the plot at large.”