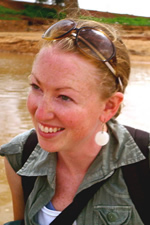 Gotham Travel Writing teacher Colleen Kinder has a bad habit—she often misses her flights. During a recent airport layover in Chicago, Colleen shared her stories of travel, writing, and teaching while—hopefully—keeping an eye on the clock.

Colleen first discovered her love for travel in college when she visited the Dominican Republic. The trip opened up a world of possibilities and gave her the education she always wanted. Colleen says, “My desire to travel has been inextricably bound to my desire to write.”

After college, Colleen took an internship at a publishing company, but realized she didn’t quite fit into the structured 9-to-5 job lifestyle. “Any job that seemed right for me,” Colleen says, “in publishing or journalism, all felt right for someone kind of like me, but not me.” And so, Colleen began to pursue a road less traveled—by traveling.

During the course of just a few years, Colleen has lived or spent time in Cuba, Iceland, Liberia, Mexico, and Egypt. She says she is most fond of Cuba and Iceland, as they are “so unlike anywhere else…so isolated.” She was also pleasantly surprised by the “warmth and approachability” of the people in Mexico City, and she relished the insanity of Cairo, though she would never choose to live there.

While Colleen may have taken an untraditional path, it’s hard to argue with the success she has achieved. Along with a wealth of global knowledge, she has to her name many articles, essays, and books (including Delaying the Real World: A Twenty-Something’s Guide to Seeking Adventure). But Colleen says she’s still very much engaged in the struggle to live a writer’s life—a juggling act of teaching, researching, fulfilling obligations to family and friends, and of course, writing.

She also has come to terms with being a “personal essayist”—a label she once resisted, fearing the personal part would get in the way of conveying the social realities of a place.  But now, Colleen says, “At the end of the day, you have to listen to your own voice. When I write about my own experiences, I feel my voice is stronger.”

After years of living the nomadic life, Colleen is moving towards an ideal arrangement: maintaining a life in the U.S. while still being able to pick a spot on the map and go. Today she calls New York home, which is fitting since the city contains “a big place of each place” she’s lived in. “It keeps a lot of memories alive,” she says. “It’s a very natural landing pad.”

And she has found others in the city who share her passion for hitting the open road. Of her students at Gotham, Colleen says, “Teaching travel writing classes reinforces how many people out there not only care about travel, but live to travel.” Fittingly, she is at work on a book about living abroad from the perspective of expatriates, and is considering creating a web resource for expats.

And, defending her tendency to miss flights, Colleen says, “I need the time between countries, cultures, life chapters. For that reason, I get lost in thought during layovers and have almost missed or missed many flights. I guess I’m in my element…in between places.”

Post-script: Colleen made her flight to San Francisco in time.