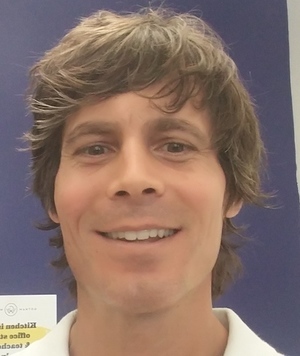 
Gotham Memoir Writing teacher Cullen Thomas is not, as he calls it, your typical sympathetic character.  In his youth, Cullen spent time in a South Korean prison for a minor infraction and he later wrote Brother One Cell, a memoir of that experience. Cullen believes a memoir should “shoot straight,” regardless of how it makes the writer appear.  And so Cullen dared to tell the truth about himself.

Cullen has a near Zen-like quality that makes it almost impossible to imagine him behind bars. Part of this attitude may in fact stem from his experiences in prison. For one, Cullen says his outlook on time changed drastically. Previously entrenched in over-stimulated, over-worked Western civilization, Cullen found himself having to slow down while in prison. “I took time eating my dinner or reading a book,” he says. “I had so much time, I had to fill it with something.” Cullen compares this reevaluation in “time management” to the kind of relaxation that people in America pay for—going to meditation or yoga retreats. (Not that he’d recommend going to jail as a substitute.)

In the midst of Cullen’s own personal upheaval, South Korea held its first democratic election. “This was a huge transition period,” Cullen says. “In some ways, as a foreigner, I got to live part of Korea’s history.” But while the political landscape was changing, the penal system was far from transformed. The literary human rights organization PEN International protested to ensure prisoners would be given writing utensils in South Korea. Inmates were not supposed to write about their time in prison, leading Cullen to assert that the state believed their “words are power.”

It’s because words are so powerful that Cullen draws a line in the sand between fiction and memoir— there shouldn’t be anything fabricated in a memoir, and if there is, the writer should disclose that information. He also encourages his students to think of their stories as acts of generosity, more of a sharing than a performance. “Don’t abuse the form of memoir,” Cullen says. “It is both creative and nonfiction. It’s fine to transpose your work from memoir to fiction, but not the other way around.”

While Cullen has written extensively about Korea, he is resistant to becoming a “one-trick pony.” He acknowledges that it’s helpful for writers to establish a niche, but he wants to be known for writing about other subjects as well. He’s also written about Bernie Kerik, the police commissioner of New York during 9/11 who was eventually convicted of white collar crime. And he hopes to launch his latest passion project soon: interviews with writers who have been incarcerated, aka, “literary ex-cons.” By telling their stories in their own words, Cullen imagines that writers will illuminate the lingering effects that prison has had on them.

Now turning to a time-honored subject of many memoirists, Cullen is at work on a family memoir. But no matter what he writes, Cullen still strives to shoot straight, urging, “You have to be able to convey what the story means to you and why you want to write about it.” Even at the expense of sounding unlikeable.