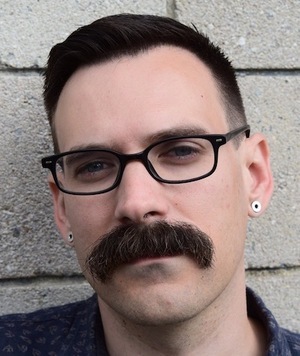 For Gotham teacher, Dan Lopez, sailing is kind of like writing. “I like the angles. I like the precision. It doesn’t allow for a lot of gray area,” he says and then adds, “At the same time it allows you to do a lot of wandering and a lot of introspection.”

As a kid growing up in South Florida, one summer, Dan got the opportunity to take sailing lessons. He and his brother loved it but his mother hated their would-be hobby. Although he always wanted to, Dan wouldn’t sail again for many years.

Another childhood hobby for Dan: writing. When he saw a poetry contest listed in the back of the TV Guide, he worked on something to enter. He sent it in… then a letter came back saying that he won. Even though he’d later discover that it was somewhat of a scam and everyone who entered won, his life was already changed forever. He went from being just a kid to a person with a validated talent. “I was like, okay, I can do this.”

That spark drove Dan to study Creative Writing as an undergrad at the University of Central Florida. After graduating, he moved to New York City and landed a job in advertising at Time Out New York. One of the companies that his team worked with was Gotham Writers Workshop and they occasionally offered spaces in classes to Time Out employees. Dan, still itching to write, took Gotham up on their offer and honed his craft in a few Fiction and Novel writing classes.

Around this same time, Dan’s then-boyfriend-now-husband, planned a special date. They went sailing. “It was the first sail of the season, and just the two of us at sunset around the Statue of Liberty,” recalls Dan. “It was really romantic.” Dan was so excited about rediscovering sailing that he ended up volunteering and then working on the boat part-time. He helped maintain the boat in the winter and taught people how to sail in season. This experience became the inspiration for his first book Part the Hawser, Limn the Sea, a collection of short stories.

Since then, Dan and his husband have moved to the west coast and Dan’s first novel, The Show House, was published in 2016. “If you remember December of 2016, that was a time when people only wanted to talk about one thing,” says Dan. “So the book kind of launched into… nothing.” Even with the lack luster debut, Dan still looks at his book with awe. “I look at it and I’m like—you did it.”

Dan is currently living in Los Angeles and finally out of advertising. Just a couple months ago he landed his dream job as an Editorial Assistant at Counterpoint Press, where he spends his days reading and writing. He also went from being a Gotham student to a Gotham teacher after his novel came out, teaching Fiction online classes.

As for advice from Dan, “You’re either in the boat or you’re in the water.”

As for writing advice, “Finish a draft. You need to find a way to push through. Find a conclusion. Finish a draft and then we can talk.”