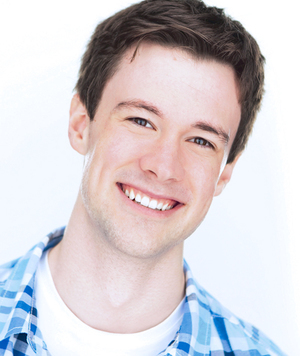 Growing up as an only child “way out in Wisconsin,” Gotham Video Game Writing teacher David Kuelz was very into two things: musical theater and video games.

And, surprisingly, the two aren’t that dissimilar. David says, they are “the only two forms of storytelling in which the writer is expected to stop the story dead in its tracks in order to provide a completely separate form of entertainment.” A dance sequence in one, a challenge in the other.

So, in his high school years, David spent schooldays focused on musicals and evenings and weekends playing games. His favorite: an RPG called Oblivion. “I put a horrifying amount of time into it,” he says, admitting that at one point he had played it so much that he wore out the disc.

Even at seven, David was no rainy day gamer. When his father came home with The Legend of Zelda: A Link Between Worlds for Super Nintendo, he was obsessed. “I remember I used to get SO excited for my birthday and Christmas, because that was when I got new games, and that's the fantasy world I'd inhabit for the next few months. After I'd beaten the game, I'd actually make up my own stories inside the world of the game and just play pretend with it.”

While he wasn’t yet much of a reader, playing video games gave David a good understanding of how stories worked and he decided to write something of his own. “I felt like I was able to sit down at a word processor and type garbage better than I was able to sit down and learn the C Sharp programming language,” he says. What he wrote was a novel, “a wretched version of King Arthur.” It was more of a learning lesson than anything. “It taught me that I liked doing it.” Writing.

After high school David moved to NYC to pursue his BFA in musical theater at Pace. It was there during one lonely Spring break (he was in a show and stuck in the city and all of his friends had skipped town) that he found some game software with a free 30-day trial. “I thought ok I’ll just screw around with it today.” He got so into it that he ended up buying the software when the trial was up. “And that’s how I made my first game,” he says. It took him almost three years to complete due to his determination to do just about all of it on his own. Everything from the story writing to the programming to the music, and he even tried to create the art. “That’s where I caved,” he says, “with the art.”

After graduating and selling his video game, David decided to switch gears and focus more of his attention on writing than acting. Since the switch he has written for over half a dozen video games and this month Gotham’s 3-week online Video Game Writing course makes its debut, and with David teaching.

Not only is David a Gotham teacher, but he is also a student. “Everything relates to everything else,” he says of Gotham. “Their Character class relates to video games and the Video Game class relates to writing a novel.” That seems to be David’s thing: doing one thing with a background in everything else. “It’s sort of a hysterical balancing act,” he says, “ but then you come to that one thing with the perspective that other people don’t have and that makes you special.”