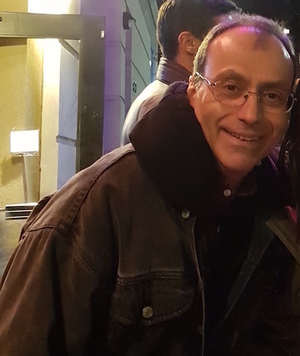 It’s hard to imagine that someone as sidesplittingly funny as Stand-Up Comedy Writing teacher David LaBarca is an “extremely shy” person. Just start a conversation with him. In a matter of five minutes, David might zigzag from the sugar content in his favorite flavor of Lärabar (“something chocolate chocolate chip”) to his hobbies (“bad time management”) to the (“I’m not kidding—hundreds”) of times he’s been to the dentist in the past few months.

He might even land with the story of how, as an introverted kid, he fell in love with telling jokes.

“Stand-up comedy is something I had a crush on since I was eight or nine years old,” says David. Growing up in Bensonhurst, Brooklyn, David bonded with his mother over their shared sense of humor. “She knew I was into stand-up comedy. So while I was doing my homework, she’d let me know, ‘oh, there’s going to be a comedian on The Merv Griffin Show, if you want to stop doing your homework and watch.’”

Because David thought stand-up was cool and sensed he had a knack for “getting” jokes, he entertained the idea of following in the footsteps of some of his favorite acts: Woody Allen, George Carlin, and eventually, as David’s sense of humor matured, Richard Pryor. But it would take David some years to build up the nerve to perform.

After graduating from Baruch College with a degree in math, David ended up working for a personnel agency in the Wall Street area. That’s when he finally bit the bullet. David jumped into his first-ever comedy show at Dover Employment Agency’s office holiday party. “It was December,” David says, “a couple of days before Christmas, 1981.” David wrote and performed about 25 minutes of material for the party, inspired by one of Woody Allen’s double albums. “I remember the next morning waking up and being high from the show, thinking, well, now you gotta keep doing this. Now you do it. It’s time to become a comedian.”

And that’s what David did. He started out by performing open mics at Good Times, a restaurant in New York, and for over a decade after that, delivered punchlines at comedy clubs across the United States, as well as in Canada, Mexico, and the Virgin Islands. He eventually returned to New York to reside in Queens and teach Stand-Up Comedy Writing for Gotham, which he’s been doing for almost twenty years now.

What does David have to say to fellow wallflowers who also aspire to write comedy? He thinks about this for a moment, then says: “When people tell me they have their issues, I mean, I relate, I understand. There was a scene in one of the Rocky movies—Rocky is talking to another boxer, and he’s telling him that a certain amount of fear is good. It’ll keep you on your toes. The right amount will motivate you.”

Then David pulls out a water bottle filled with lukewarm coffee from his backpack, and jokes about various other fears he harbors: like riding a bicycle, authority figures, and roller skating.