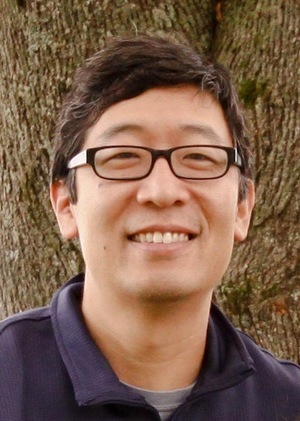 When David Yoo started teaching for Gotham he had “DSL for internet, a laptop that weighed approximately seventy pounds, and was in the thick of a soul-searching internal debate about joining Friendster.” That was ten years ago.

Born and raised in Connecticut, David’s family moved briefly to Seoul, Korea when he was three. In both Korea and the States, he felt like an outsider. In Seoul he couldn’t speak Korean and once back, his classmates treated him as “pretty much the token Asian guy.” Rebelling against the stereotype of a “disciplined, curve-blasting, academic genius,” meant that choosing to sit down at a desk to write was completely off his radar. Instead, he chose to identify as an athlete. “But,” he adds, “it’s kind of startling to realize just how much time I spent doing absolutely nothing.”

Midway through college was the first time David wrote creatively. “I got the urge out of the blue one morning,” he says. “I was instantly hooked.” Early encouragement from his professors led him to enroll in fiction writing workshops and then go on to pursue a masters degree. He has since published four books that range from fiction to personal essays. “I tend to approach my fiction from an autobiographical base,” he says and assures that whatever genre he’s writing he’s “deep in the throes of appalled self-analysis.” He uses writing to work out his own childhood and to piece together how the person he is came to be.

That person is a Massachusetts-dwelling husband and father of two who hates snow (and anyone who doesn’t), plays in an adult soccer league, and hoards musical instruments. “There’s a drum set collecting dust in my bedroom, next to my equally unused guitar and alto sax,” David says. The music may not be flowing but the writing is.

For David, writing seems incredibly hard while doing it, but easy after the fact. “This self confidence is fleeting,” he says because the moment he starts a new project it seems hard again. The best advice he has is to sit down and just spill it out. “There’s only so long you have access to that initial passion you have for the project, so don’t dawdle.”

Teaching both Fiction and Humor writing classes, he claims his motives for teaching are somewhat selfish. “I usually don’t have enough distance from my work because my face is pressed up against the monitor all the time.” Teaching helps him see his writing more clearly.

Today, he is focusing on a new novel, which he types from a slightly updated computer with a faster internet connection. And he’s no longer thinking about Friendster.