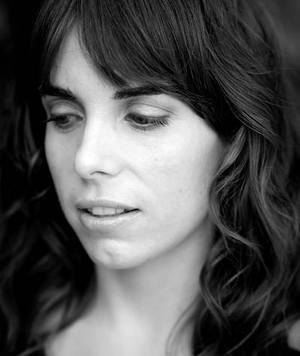 Gotham teacher Domenica Ruta credits her dog Zazy as part of the reason she became a writer.

The beagle/dachshund/terrier mix was rescued from living on the streets of Puerto Rico after making her way to a woodworker’s studio. “She was so traumatized, almost unadoptable,” Domenica says. “We’ve actually lived these crazy parallel lives—we’re made for each other. She’s stubborn and recalcitrant, just like me.”

A recovering alcoholic, Domenic also calls Zazy one of the best drunk decisions she’s ever made. “Even though I was really young and drunk and miserable,” she says, “I knew I had to take care of this creature.”

Domenica calls her sobriety the most important achievement of her life, even more so than writing her memoir. “The book was written because I got sober,” she says. “I was between two awful choices: ultimate self-destruction or giving up substances. It’s a miracle that the scale tipped just that one percent, fifty-one percent [toward sobriety] versus forty-nine [self-destruction], and that saved my life.”

Fast-forward a few years later and her book With or Without You is published. It’s an account of Domenica’s tumultuous relationship with her mother over the course of both her childhood and early adulthood. In one scene, Domenica explains that she had essentially “broken up” with her mother. “It sounds strange,” she says, “but that’s what it was.” After Domenica ceased contact, her mother would call several times a day and night, and leave screaming messages on Domenica’s voicemail. Sometimes, her mother would just hold the phone up to the radio, and one of the songs she played was U2’s “With or Without You,” one of their favorite rock anthems.

As the publication date for her book drew near, Domenica got a call from her editor that there was a title change request. “It felt like a bad episode of ‘Say Yes to the Dress,’” she says. “Everyone wanted to help, everyone had an opinion on the title.” Finally, the editor’s partner suggested With or Without You, completely off the cuff. Domenica couldn’t believe she hadn’t thought of it first.

When giving her students advice on writing about their childhoods, Domenica takes stock in this Flannery O’Connor’s quote: “Anybody who has survived his childhood has enough information about life to last him the rest of his days.” The only problem is perspective. Domenica asks, “How do you preserve the wonder and freshness of a child’s vision and still have an adult narrator steering the ship?”

As Domenica points out, just remembering things is not a meaningful act. It’s only after you’ve learned how to process the experiences and extract meaning from them that you can craft a really powerful story. “Ideally,” she says, “good memoir writing is both a liberation of a soul and really great storytelling.” Domenica likens the process to taking garbage and turning it into a precious metal.