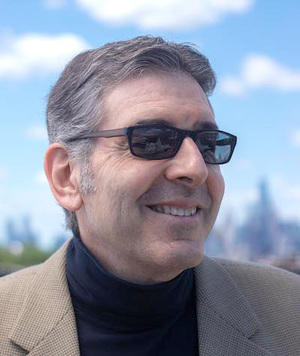 “I’ve been really lucky in my life,” explains Gotham instructor Doug Katz, whose career as a screenwriter, producer, and director has been deeply motivated over the years by the generosity of teachers. In college, Doug studied Earth and Planetary Sciences at John Hopkins with Doctor Robert Bakker, the paleontologist who, in addition to serving as an advisor on the film, inspired the character of Doctor Robert Burke in Steven Spielberg’s The Lost World: Jurassic Park. This “cowboy-hat-wearing, beard-down-to-his chest” professor, as Doug describes him, was a character in more ways than one.

No doubt, studying dinosaurs with Dr. Bakker created a strong pull in the direction of a continued career in science. “With Bakker,” Doug remembers, “I knew I wanted to study biomechanics; I was thinking of going into sports medicine.” In the end however, art won out. “My senior year I asked myself, ‘What is it that I really enjoy?’ It was film.”

From there, Doug wrote a 10-page script, applied to graduate programs, and was accepted into the Screenwriting and Directing MFA program at Columbia University where, he says, “I stumbled into my next great set of teachers.” During those formative years, Doug studied with a list of award-winning creatives, including Miloš Forman, director of Amadeus and One Flew Over The Cuckoo’s Nest, John Avildsen, director of Rocky and the first three Karate Kid films, and George Roy Hill, director of Butch Cassidy and the Sundance Kid and The Sting. His mentors were “really accessible filmmakers interested in giving back,” says Doug. “It was this glorious heyday of film school nirvana.”

Among those instructors was Frank Daniel, co-chair of Columbia University’s film division at the time. He left an impression on Doug and although Frank didn’t inspire any famous fictional characters—as far as we know!—his persona and drive as a teacher reminds Doug of a rather famous movie line. “I’ll tell you right out I’m a man who likes talking to a man who likes to talk,” says antagonist Kasper Gutman, portrayed by Sydney Greenstreet, in The Maltese Falcon. That is how Doug remembers Frank, as a man who liked to talk to people who liked to talk…about movies.

Now, Doug’s approach to teaching is not far off from those who taught him. “I get a kick out of talking about stories; that’s what keeps me charged,” says Doug. His enthusiasm hasn’t waivered since the days of film school nirvana. The 10-page script he submitted as part of his application later developed into the script for his directorial debut, Life In The Food Chain, a 1991 comedy he worked on with fellow Columbia graduates. On the topic of being part of a workshop or writing group, Doug says, “You’re making contemporaries.”

“You end up with partners and sounding boards,” continues Doug. Often, in the classroom, there is a moment when a student’s script comes to life, as other students chime in with ideas and suggestions. “In that instant,” he says, “you know that you’ve improved something.” As a film teacher, he tries to encourage this lively collaboration, a collaboration that depends on what he calls a win-win scenario. “The way that you set up a win-win scenario is by changing the goal,” says Doug. “Instead of trying to write a draft that other people will like, I suggest that people try to make the goal to be a better writer.”

Doug assures, “If you set the goal of being a better writer, then you can’t lose because all you have to do is keep working. There will be days that are bad but that’s okay, that’s part of becoming a better writer.”