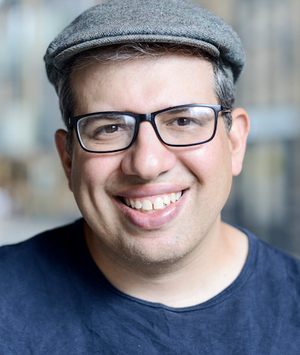 Gotham teacher Edward Einhorn has two major influences: The Wonderful Wizard of Oz and the Romanian playwright Eugène Ionesco. It’s hard to imagine what one has to do with the other, but Edward grew up listening to his older brother read both (along with Samuel Beckett, for good measure). While reading The Wonderful Wizard of Oz, Edward discovered an afterword written by Edward Wagenknecht. “He stated that he always wanted to be writer after he read Oz,” Edward says. “And I thought I could do that as well.”

And in fact, he did. In 2000, Edward wrote a new Oz book in honor of the one-hundredth anniversary of the original series (there were fourteen altogether) and a year later, he hosted an Ionesco theater festival.

The new Oz book, titled Paradox in Oz, featured a “Parrot-ox” as its main character. Tempus, named for his time traveling ability, could do anything as long as it was deemed “impossible.” A mystery occurs back in time and in the course of trying to solve it, as Edward puts it, “Oz gets messed up.”

Meanwhile, Edward had been tinkering with starting his own theater company. The concept behind The Theater of Ideas is inspired by E.O. Wilson’s book Consilience: The Unity of Knowledge, which discusses bringing back knowledge together in the way of the ancient Greeks. “We do plays on science, politics, and philosophy,” Edward says. “And our next play is about economics.”

“I wasn’t really focused on it until the Ionesco festival happened,” he says. Soon, Edward went from running his company out of a friend-of-his-mom’s art gallery to hosting thirty-nine shows in thirteen theaters over the course of three months. “I somehow convinced Ionesco’s daughter to give me the rights to his work and then the French government to give me some money, and then I got the thirty-nine directors to do thirty-nine shows.”

The first performance of the festival was on September 6, 2001, at the Connolly Theater in the East Village. “The absurdism struck home in a different way after 9/11,” Edward says. “You have to remember these works were being written post-World War II, so the reaction at the time was, ‘Everything is crazy and unpredictable, but you have to see the comedy of it, too.’ And I think people felt similarly after 9/11.”

As a result of his love for Ionesco, Edward started getting interested in translation. “I knew some French already, so I took this monologue he wrote about preparing a hard-boiled egg and translated it.” Edward has also translated works in Greek (Lysistrata, among others) and Czech (mostly works by the playwright Vaclav Havel).

Edward discovered Havel when he was a freshman at Johns Hopkins looking to take on a directing project. He searched through a stack of one-act plays in the library, where he uncovered Audience. The protagonist is a writer named Ferdinand Vanek whose work is banned in Communist Czechoslovakia where Edward says, “You were considered a social parasite if you didn’t have ‘real’ job. His character ended up becoming a symbol of the revolution in Czechoslovakia.”

In the midst of the revolution, Havel was made president. Edward says, “I thought, This is amazing—they made their absurdist playwright the president! I love this country!” Years later, Edward wrote the libretto for The Velvet Oratorio, an opera about the Velvet Revolution. He even sent a copy to Havel, who was very pleased with it.

With all of his varied writing interests—plays, books, operas—Edward admits it’s easy to get lost in the struggle of making a living at writing. But when he comes to teach Creative Writing 101 at Gotham, he remembers the joy. “Being in a room with people who are learning about this stuff for the first time is so fun,” Edward says. “And I try to access the teachers I had who loved talking about writing, who loved doing what they were doing. I remind myself that the reason I’m doing it all is because I love doing it, too.”