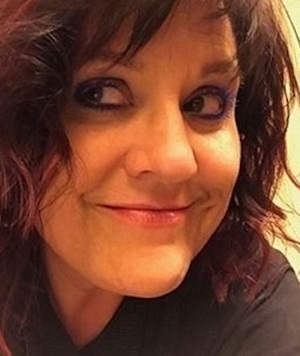 Elane Johnson is rattling off a list of all the accidents she’s ever been in. There’s the time she split her lip roller-skating as a little girl and the time she fell in a Walmart a couple years ago.

“I had a terrible accident in which I smooshed one side of my face and I’ve had double vision ever since. That was in 1982,” she exclaims. “I also accidentally got married four times before him,” she says, pointing to her husband who is sitting in on our Skype conversation in case Elane needs a set of ears, as Elane is deaf. Although she can read lips, sometimes the screen freezes and she misses something.

Elane grew up just outside of Macon, which is a (“horrible place!”) just south of the center of Georgia. Her mother was a vocalist and musician, and Elane planned to follow in her footsteps. The two even performed together often.

But Elane’s genetics had a different plan for her. Her father is a deaf person, and she inherited progressive hearing loss from him. “So as that came along I couldn’t perform anymore,” she recalls. “I had to pick something else. It was really, really hard to let that go.”

Initially she decided to go into pre-law, but she couldn’t hear the important information in class. “The law school even bought me some really nice hearing aids, but all I could hear were the chairs moving,” she says. After that, she settled on majoring in English and Education with a minor in Art.

Soon after graduating, Elane moved to (“another horrible place!”): Indiana. While she lived there, she raised her two daughters and worked as a teacher, which she excelled at. “I have this weird ability to break things down into teachable parts,” she says. “I can explain something and people get it, and they end up learning instead of glossing over it.” She was teaching in the classroom, but her hearing was still getting progressively worse. In 2007 she decided to go back to get her MFA in writing online at National University in San Diego.

Although Elane didn’t go back for her MFA until later in her career, she has been writing nonstop since she was in the 5th grade. “I got a really, really bad poem published in our town’s newspaper around that time and never stopped since then,” she says.

She was working on a novel when she was accepted and thought she would become a fiction writer. But after two classes she realized there was a whole world of nonfiction that she had never known existed. “I thought, oh my gosh, I don’t have any blocks writing this.”

Since receiving her MFA, Elane’s life has changed. She is now married to the right man, whom she met in one of her online MFA classes. “We were like the king and the queen of our classes. I was like who is this guy?” They lived in different states and after chatting for six months she flew out to see him on his birthday. “And that was it,” she says.

She now lives in Florida (“An even more horrible place!”) where she teaches Online Fiction classes for Gotham. Of her students she says, “I get more excited when they get published than when I get published. I go shrieking around the house.”