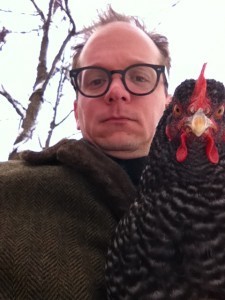 This past winter, Erik decided to vent his frustrations over Boston’s public transportation troubles by writing a haiku a day via Twitter and compiling them on his Tumblr.

Erik commutes from the suburb of Littleton to Harvard where he works in tech support (in addition to writing and teaching) The Boston area, known for its record snowfalls, got particularly pummeled this year. “The commute is a bit of a hassle as it is, but then we were starting to impose on other parents to pick up our son, shoveling snow off our flat-roof house,” Erik says. “I just started losing my mind.”

As he wrote more poems, Erik sent emails to various media outlets and even got an article written about his project, and later was interviewed by NPR. “It just caught on, everyone was mad at the train situation,” Erik says. “I was trying to be true to the spirit of haiku, but also be funny and tell off the train at the same time. People needed that.” From then on, Erik’s winter greatly improved. Complaining in haiku form was more fun for him than simply “being an old man, yelling at a cloud,” as Erik puts it.

“It’s hilarious, but also tragic,” he says. “It’s this sacred form of Japanese poetry, but they teach it to you in kindergarten.”

When he was growing up, Erik spent a lot of time reading and being read to. “I had elderly aunts who were teachers,” he says. “They had all these illustrated books from the 1920s, some even older than that.” Living in a rural town in Western Massachusetts, Erik would play in the woods, go swimming, and then sit down and read a book or draw pictures. “If I saw something I liked, I’d want to try it, too,” Erik says. (Clearly, that hasn’t changed.)

The librarians in town knew Erik by name and let him take out just about any book he wanted—even those intended for older kids or even adults. “The only time there was ever a problem was when the librarian was my friend’s mom,” Erik says, laughing. “She was concerned about this occult book I checked out. She told my mom, but my mom wasn’t worried. She knew I was just into ESP and witchcraft.”

While he did get teased for his last name (insert many Kraft cheese-based insults here), it was a high school friend with the last name Mayo that inspired his YA novel Miracle Wimp. “I tell my son, Graham—who gets called Graham cracker—kids will always find a way to make fun of you, no matter what.”

And at the very least, Graham has a good time showing off his dad at school. Erik has gone to Graham’s classes to read from his children’s books and talk about writing. “He’s very into my job as a writer,” Erik says. “He had to come with me to my day job at Harvard and it didn’t really register to him that I also teach and do tech support!”

“My friend and I were talking about David Lee Roth [the lead singer from Van Halen],” Erik says. “He’s a good showman, sure, but he also speaks a bunch of different languages, has a black belt in Karate, he’s actually very smart. He has this whole other side of him you wouldn’t know. So at the end of it, my friend says, ‘You’re like the David Lee Roth of children’s books.’”

Side note: Before his son was born, Erik and his wife referred to him as “Diamond Dave.”