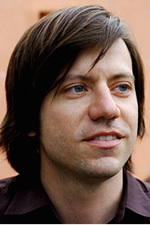 
Gotham Food Writing teacher Evan Rail explains that writing about travel, food, and culture is a little like finding a secret fishing spot—you have to know where to go and what you’re after. And, sometimes, you have to appreciate the beauty in the unexpected: you may hope for rainbow trout, but instead, find catfish.

At first, Evan joined the masses at the same pond. After graduating with a master’s degree in French Literature, he began writing restaurant reviews in Paris. The culinary tradition of the French is greatly renowned, but Evan wanted to explore more uncharted territory. He started taking regular trips to Prague and gradually found himself making the leap from the familiar to the unknown. For Evan, it seemed an appropriate time in his life to consider a country “living on what it would become rather than what it had been,” referring to the newness and excitement of the Czech Republic.

In the ten years since Evan has relocated to the Czech Republic—far from his origins of Fresno, California— he has found a bracingly different culture from what he had previously seen. He has learned a bit of the language, freelanced for various European news sources, and written the Good Beer Guide Prague and the Czech Republic. Beer, of course, is one of the country’s biggest exports. (A little known fact: the Pilsner was first brewed in the Czech Republic.) When the Good Beer Guide was published, no one had written anything like it—in English or any other language. When it comes to culinary wonders, Evan says, “Sometimes, it takes an outsider to show people what they have.”

Evan observes that the universality of food is, in part, what makes food writing so interesting, but there are so many stories yet to be told—either because of language barriers or financial resources. For example, Evan points out that Bosnia (a country with even less journalistic coverage than the Czech Republic) has a huge coffee culture, but hardly anyone knows about it.

While you can often find Evan’s work in the Travel section of the New York Times, as well as American food and drink magazines, he is also an accomplished poet. He started writing poetry partially because he wanted to become a sharper writer. Appropriately, he calls this practice “cross-training,” which he recommends for any writer. “Poetry makes you much more attentive to the sound of words,” he says. Over the years, Evan’s love for verse has grown, and in 2005, he released a full length book of poems called Tsunami. He observes that all writing is really the same—“it’s about putting the right (if not best) words in the right order.”

Evan also finds teaching to be a great sharpening tool. “Writing becomes so habitual, but teaching allows me to vocalize the writing process, especially on revision. By talking to students, I’ve made myself more conscious of my own habits.” Deadlines and family obligations also help him maintain a Zen-like state when it comes to getting the writing done—there’s no time to agonize over each point of punctuation. “With so many demands, you can’t waste time,” says Evan. “The math is weird, but it works out.”

In the future, Evan may consider writing another beer book, but this time in the form of collected essays or a travel log. He would also like to investigate the local versions of Coke and Pepsi that existed under Communism. It seems that wherever Evan’s curiosity leads him, there’s an undiscovered fishing spot waiting to be found.