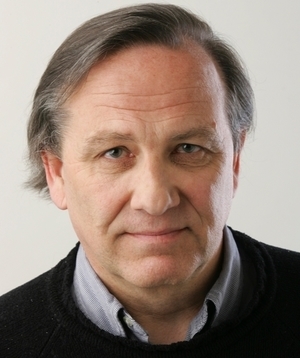 Gotham teacher and journalist Frank Flaherty conducted his first interview with famed crossword puzzle editor Eugene Maleska. Frank was only in his early twenties then, yet to begin his career at the New York Times. “I didn’t really know what I was doing, but it was a lot of fun,” he says. “He looked just like you would imagine a crossword puzzle editor to look like: mismatched socks, tie thrown over one shoulder.” While the finished piece was never accepted for publication, Frank maintains it was a worthwhile experience: “I just had fun doing it.”

When Frank first began working at the Times, he was assigned to write an investment column for the Business section. “It’s quite difficult to write a compelling column about bond funds,” he says. “You have to learn a way into it.” But the good news? “If you can write compellingly about stuff like that, then it’s all the easier to write well about something you do care about.”

Eventually, he worked his way up to Deputy Editor of the Metropolitan section, which covers news around New York City. Frank saw a lot of stories cross his desk over the years, but one piece he’s especially proud of is a feature about the psychiatric emergency room at Bellevue Hospital, written by Erik Kinetz. “An ER without blood,” as Frank puts it. “All of the wounds are on the inside.” It was difficult to get the story done, as there were lawyers involved due to patient confidentiality issues. But all the work paid off because, as Frank points out, “It was a good journalistic thing to do. It made people more sensitive to the pain of mental illness.”

“Journalists don’t make much money,” Frank says, “but you have a lot of great stories for cocktail parties. You get to have all these different lives.”

During his tenure at the Times, the novelist and memoirist Susan Shapiro invited Frank to her class to guest lecture on the process of editing. As he prepared for his presentation, Frank started thinking about all the editing issues he had encountered, but had never written down. It was out of this material (and his subsequent teaching at NYU) that Frank’s book The Elements of Story: Field Notes on Nonfiction Writing was born. “It’s sort of a diary of how I edited,” Frank says. “It’s a ‘field guide,’ really, into the newsroom.”

Of the more common problems that writers face, Frank includes: 1) “The Conscientious Writer”—the writer who always wants to keep everything in the story. But, as he explains, “You have to choose something to focus on, otherwise you’ll focus on nothing”; 2) “The Irresistible Anecdote”—the problem with the anecdote is when it doesn’t have a place in the story; 3) “The Fruit Salad Lede,”—when a writer tries to jam all the important information in the first graph of an article; and 4) “Show versus tell”—too many writers want to be direct and tell flat out what is and what isn’t. “Showing gives the reader something to do,” he says.

These are just a few pearls of wisdom you can learn from Frank in Gotham’s new course, The Editor’s Eye, which covers self-editing for both nonfiction and fiction students.

Frank has since left the Times to concentrate more fully on writing. He’s in the midst of his second book, tentatively titled English: A Fan’s Notes. (It’s inspired by a chapter in Elements of Story on the beauty of language.) “Words,” Franks says, “are like my music. Some people look at paintings, I look at words. They’re my art.”