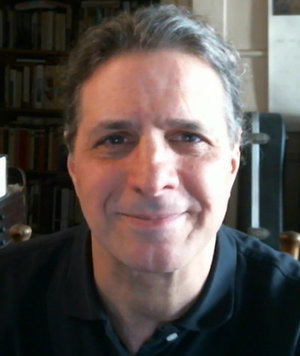 
Gotham teacher G.D. Peters looks like a combination of Judd Nelson and Al Pacino—or, as he puts it, perhaps one of their fathers. Although it’s hard to imagine this now-happy bohemian as a trial attorney—relentless in his pursuit of justice—G.D. practiced law in New York for many years. But in between briefs and depositions, he managed to find time to feed his other passion, writing.

When he was growing up, G.D. was encouraged by his aunt to pursue his artistic interests. She bought him the Oxford Book of American Verse, which is how he discovered Poe, Longfellow, and other great poets. While G.D. was in college, though, he thought it would be wise to have something to “fall back on.” He decided to apply to law school and ended up at SUNY Buffalo. But little did G.D. know a literary surprise awaited him.

Anthony Burgess, author of the famed novel A Clockwork Orange, had taken a position as a visiting professor at Buffalo. At an opening reception, the author agreed to read and critique students’ work. G.D., excited by the opportunity, took Burgess up on his offer. He trotted out to Burgess’s Quonset hut, where the school had set the author up with a faculty office, to find a stack of other students’ manuscripts two feet high. Undeterred, G.D. placed his story on the top of the pile. Not long after, Burgess phoned G.D. to say he liked his work. Burgess became something of a mentor to G.D., leaving him with the following pieces of advice: “Leave the girl [referring to G.D.’s then-girlfriend] and drop out of law school.” Although G.D. did not heed that advice, he did keep writing.

He wrote in the mornings and evenings while holding down the fort at his own private law practice in Manhattan where he focused on defending negligence cases. (That is to say, he fought on behalf of clients up against “ambulance chasing” lawyers.) But after ten years of toiling away at a novel, G.D. realized he was never going to excel if he didn’t devote himself solely to his writing career. “People told me I was crazy when I first opened the practice,” he says. “Then they told me I was crazy for closing it!” In order to start anew, like many great writers before him, G.D. tended bar. He put his novel aside and started writing short stories and even got a few published.

Eventually, he landed at the Fiction MFA program at City College and began teaching undergraduates where pulled out some of his old tricks. “Being a trial lawyer is a bit like being a teacher,” he says. “You have to be able to keep the jury’s attention, it’s almost like performing.”

Today, we can find G.D. “performing” in the classroom, either at Gotham or City College. When he’s not writing or teaching, G.D. plays the guitar and saxophone and he serves as an Associate Editor of the magazine, Fiction. He’s currently working on a memoir about his early days practicing law—laced with such tales as scoring his first victory (a dog bite case) and arguing a case in federal court without knowing he did not have the required credentials. The project is fittingly titled Running from the Law.