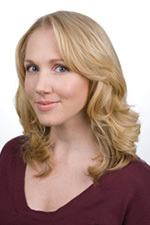 You could say Gotham teacher Heather Wood Rudúlph lives at the intersection of  feminism, journalism, and sociology. She and fellow Gotham teacher Jennifer Keishin Armstrong co-founded Sexy Feminist, a blog that explores the state of modern feminism, running the gamut from serious political legislation to the implications of plastic surgery. Recently, the blog generated enough buzz to become a book. Heather contends, “Feminism is part of every facet of our lives.”

Heather and Jennifer share a unique partnership. While Heather is married and has a young son, Jennifer is in a long-term relationship with no plans for marriage or children. Heather has marked the major milestones in both their lives thus far by noting that when she was getting married, Jennifer got her first book deal; when Heather had her son, Jennifer was working on her second book with Heather (Sexy Feminism, the book based on their blog). Their friendship is an occurrence Heather would like to see more of—women partnering together regardless of their lifestyles.

When the pair started Sexy Feminist, Heather says they went through a kind of awakening. Both women realized they wanted to contribute to organizations that would help them walk the talk, so to speak.  Heather references Gloria Steinem’s famous quote about how a feminist is defined: “A feminist is what the dictionary says is a person, male or female, who believes in the full social, economic, political equality of women and men, and I would say also acts on it.”

They both began volunteering with the Afghan Women’s Writing Project, which allows women from all over Afghanistan to participate (secretly and safely) in creative writing mentorships. Heather often gives her students culturally relevant writing prompts and helps them with their English. “It’s so humbling,” Heather says, “just to hear their stories.”

On the flip side, in the US, Heather teaches a course on race and gender equality in the media at American River University, where many of her students are unaware of the struggles of the women’s movement or the history of feminism. While this is partly due to their age, Heather finds a much bigger problem: a lack of information. For example, the first film about the women’s rights movement, The Makers, was made just this year.

Interestingly, in nearly every Gotham Nonfiction 101 class Heather teaches, she finds a student who writes a feminist-related essay—even though feminism isn’t strictly on the table. Typically, she finds that these women are of a certain age, usually married with children, and perhaps never had the opportunity to explore or question their desires early in their lives, like many young women do today. “In a way, these older women have more in common with twenty-somethings,” Heather says. “They are each other’s emotional peers.”

Similarly, Heather’s mother was more concerned with raising six children first, but once they were grown, started her own business at an age when most people retire. About raising her own child while also managing a career, Heather says, “It’s challenging. But I feel more fulfilled when I get to work on something I love and raise a human.”