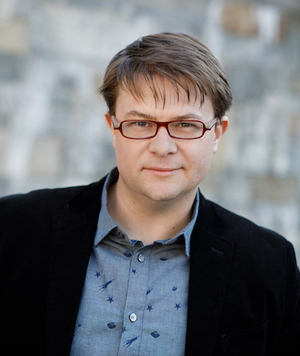 Ian S. Port has only ever known two things: writing and music. But even now, Ian considers guitar his indulgent hobby, whereas writing is his profession.

“I approach everything as a writer,” he said.

This has been the case for so long, that when asked if he had that ‘epiphany’ moment when he realized that writing was his main priority, he said, “I would have been too young to remember.”

While Ian did have early aspirations of being a musician, those quickly faded when he fell in love with the romanticized dream of being a writer. He was already writing for his high school paper when he visited Key West, where he saw Ernest Hemingway’s house and the massive library therein. And just like that, he started chasing the dream.

When he went to college in San Diego, it was more of the same: writing for the paper, freelancing, and doing the most-writerly thing that someone who has always loved writing could do—writing. A whole week after graduating college, he landed at a local newspaper in San Diego covering the spectrum of local news. While he was indeed writing, Ian knew that he wanted to move more towards the intersection of his two lifelong passions—music and writing.

It didn’t take long. Ian started working as the music editor of San Francisco Daily, where he spent his time going to concerts and hanging with musicians. A job that seemed perfect to him, but, in the end, wasn’t.

“It was a terrible job; I don’t know why anyone would want it,” he said. He wanted to do something more serious, and with fewer deadlines. Something geared more towards, well, writing. Serious writing. And, of course, music too. Dead set on pursuing something more “writerly,” he moved to New York to obtain his MFA from Columbia University with the goal of writing a book.

Naturally, it had to be about music, but he wanted it to be a story too. He became obsessed with the “one-eyed, nearly deaf” Leo Fender, the forefather of Fender guitars, and the budding rivalry that developed between him and Les Paul, both of whom now have their names engraved on guitars around the world.

Three years of writing and research later, The Birth of Loud is set for release (January 2019).

Ian has never stopped writing, and it doesn’t seem likely that he ever will. “I’m interested in everything,” he said, when asked how he can write about such a wide array of musical topics. “A lot of music writers want to write about hip-hop or country. I’ve found it hard to specialize in anything.”

And as for his own musical endeavors, Ian wanted to be clear about something: “I’m a much better writer than guitarist.”